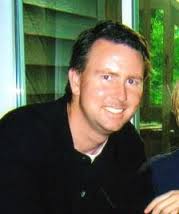 On July 4, 2014, the United States of America will commemorate its 238th birthday of independence. It will be a festive day throughout our country and rightfully so.

July 4th also marks a special and celebratory day down South in Atlanta, Georgia. More than 65,000 runners are expected to compete in the 45th running of the Peachtree Road Race, the largest 10K in the world.

As the throng of runners navigates its way through the 6.2 mile course with thousands of fans and spectators cheering and looking upon, a Burbank native and Burroughs alum will be working behind the scenes as a member of the medical staff.

Meet Charlie Peebles, DPM, of the Atlanta Foot and Ankle Center. He is a podiatrist specializing in the medical, biomechanical and surgical treatment of problems of the foot, ankle and lower leg with an emphasis on lower extremity sports medicine.

In addition to the Peachtree Road Race, Dr. Peebles also serves as a staff physician for the Atlanta Half Marathon and Georgia Marathon. He has served as Medical Director and race chairman for the Jingle Bell Run to support the Arthritis Foundation.

“I do a job that I love. The biggest part I love is keeping people active; keeping the weekend warriors going,” Dr. Peebles said. “I really enjoy working with people who will run the half marathon for the first time.”

The 1987 graduate of John Burroughs High School currently resides in Alpharetta, Georgia, with his wife Michelle, and children Jaymi and JT. His parents, John and Fran, remain happy residents of Burbank. Dr. Peebles is the oldest of three children, with Mac in the middle and John the youngest brother.

The name might sound quite familiar as his brother, John, is the Cross Country and Track head coach for Burroughs. While John continues to be an inspiring coach, teacher and mentor for the boys and girls at JBHS, older brother Charlie has established a career to be proud of also.

He credits his parents as his biggest supporters but was quick to point out that three coaches from his days at Burroughs had a positive and influential impact upon him. Dave DeLong, Art Sullivan and Terry Scott were three men who “brought me along from a coaching and life perspective.”

Since his days as a Burroughs tri-sport athlete participating in cross country, basketball and track, Dr. Peebles always had the passion and interest in sports medicine. After graduating from Burroughs, Dr. Peebles attended U.C. Irvine where he majored in Biology.

Dr. Peebles earned his Doctor of Podiatric Medicine degree from the California College of Podiatric Medicine in San Francisco, Calif., in 1995. He completed his surgical residency in 1998 in reconstructive surgery of the foot and ankle at Northlake Regional Medical Center in Tucker, Georgia. He returned to Atlanta in 2006 after practicing with Bluewater Orthopedics on the Florida Panhandle.

Dr. Peebles has been the team podiatrist for the Atlanta Hawks since 2006 and also works with the Atlanta Braves, Atlanta Falcons, University of Georgia, Georgia Tech and many high school athletes in town.

Working for the professional franchises of the Hawks, Braves and Falcons has been a rewarding experience. He assists the athletes by modifying shoes, customizing orthotics and working with the different trainers on staff. When needed, Dr. Peebles will perform surgery for an ingrown toenail or other foot ailments.

Before any professional athlete can shoot a jump shot, swing a bat or throw a football, they must be comfortable in their own shoes. Dr. Peebles’ valuable insight, knowledge and care are as important to each athlete as the agent they hire or the coach they play for.

Aside from meeting with the players in the locker room prior to their games or at his office, Dr. Peebles has enjoyed the relationships he has developed with the athletes such as the Hawks’ Al Horford and former Hawks’ Josh Smith (Detroit Pistons) and Jason Collins (Brooklyn Nets).

“The coolest thing for me is to see them off the court. They are down-to-earth people who are very respectful and kind,” Dr. Peebles said. “It’s fun to keep up with them after their careers seeing their families and kids.” 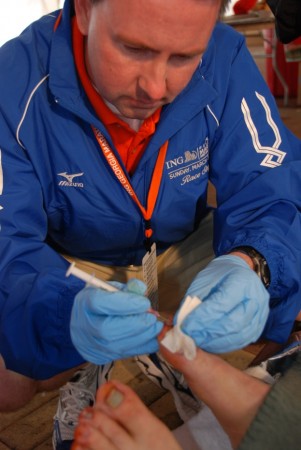 He is board certified in Reconstructive Foot/Ankle surgery by the American Board of Podiatric Surgery and holds fellowships in the American College of Foot and Ankle Surgeons and the American Academy of Podiatric Sports Medicine. Dr. Peebles has served on multiple international medical missions and lectures nationwide on various surgical and sports medicine topics for the Podiatry Institute and other state organizations.

During his free time, Dr. Peebles is active in running and basketball and has coached youth basketball, soccer and football. He is a two-time qualifier and finisher of the Boston Marathon in 1995 and 1996. At the 100th running of the Boston Marathon in 1996, Dr. Peebles ran alongside his brother, John, who “pulled me through” across the finish line.

From his youthful days at David Starr Jordan Middle School to raising a family and working in the field of Podiatry, Dr. Peebles has experienced much joy and pleasure being there for others.

“I feel very blessed to be here,” he said. “I feel like God put me here to help others. He opened some doors for me. It’s just been a blast.”