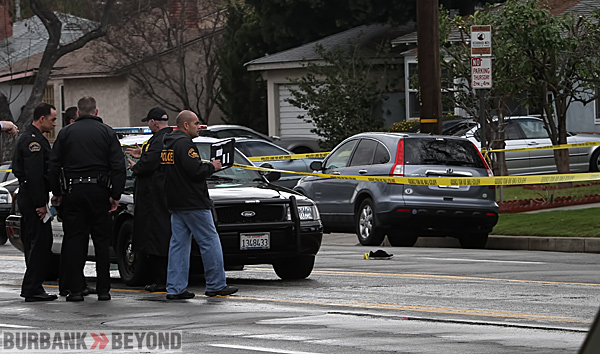 Hollywood Way was CLOSED during this investigation on Wednesday after a armed suspect struggled with police was struck by an alert citizens vehicle. (Photo by Ross A. Benson)

An armed suspect confronted Burbank Police in the 1900 block of Hollywood Way on Wednesday, Feb 15, resulting in a fight that included a citizen assisting by hitting the suspect with his vehicle.

Officers were first called to the the 1500 block of Evergreen St., regarding a family disturbance around 11:30 am Wednesday.  When the officers arrived, they were advised that the suspect had fled the scene, so they started checking the surrounding area and located the suspect in the 1900 block of Hollywood Way. 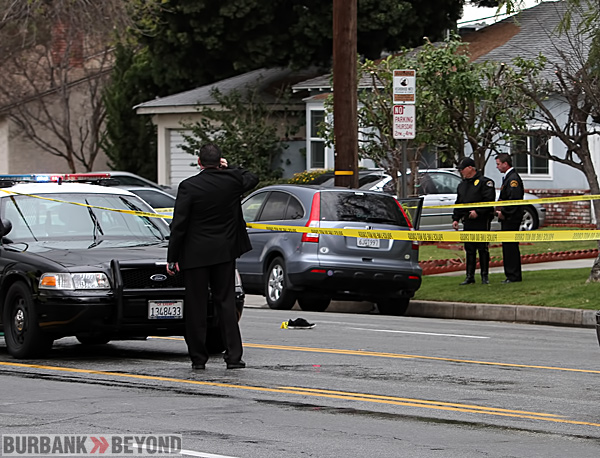 Burbank Police look for evidence at the scene of the struggle on Hollywood Way . (Photo by Ross A. Benson)

As the officers approached the suspect, they observed him to be armed with a rifle. A struggle ensued between the suspect and the officers over the rifle and they spilled into the street. During the struggle, an officer’s firearm was dislodged and landed in the street.

At least two witnesses stopped in their vehicles. One witness observed the suspect attempting to retrieve the officer’s firearm from the street. The alert citizen, believing that the officer’s life was in serious danger, turned his vehicle into the suspect, in an effort to protect the officer, striking the suspect. 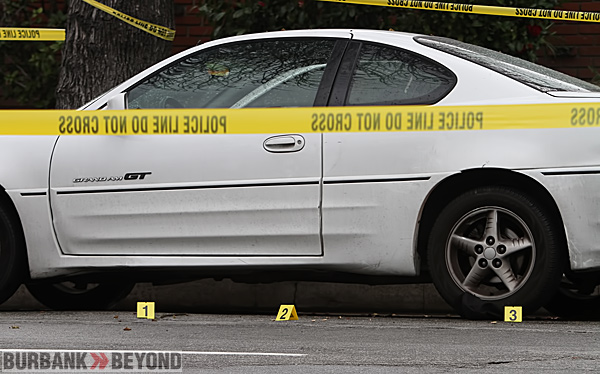 Evidence markers are in place where it possibly appears bullets are laying. (Photo by Ross A. Benson)

The suspect and an officer were transported to local hospitals for medical treatment. The officer was treated and released for injuries sustained in the struggle. The suspect is in serious but stable condition, due to injuries incurred from the collision.

Due to the suspect’s medical condition the date of arraignment will be announced later.

The citizen who assisted officers has not been identified as of this time. 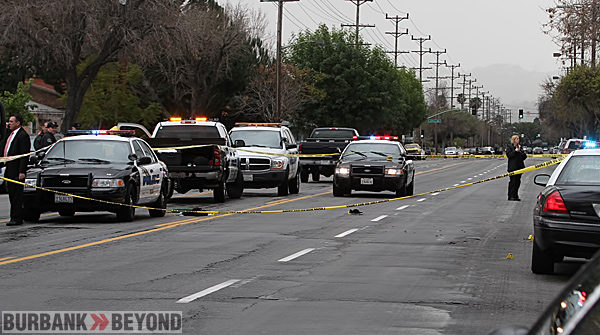 Hollywood Way was CLOSED in both directions during this investigation on Wednesday. (Photo by Ross A. Benson)

Police Arrest Man Who Attacked Woman On Street
Man Arrested for Attempted Murder on Pepper Street
Can You Identify This Woman for Burbank Police?
Councilman Bob Frutos and BPD Honored at Luncheon