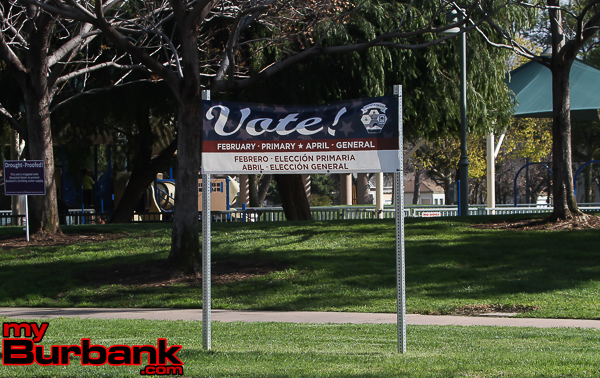 Burbank City Clerk, Zizette Mullins, announced that final results are in for Burbank’s Primary Nominating Election held Tuesday, February 24. Of the 61,104 eligible voters, 10,190 ballots were cast (9,869 ballots were cast in the 2013 Primary), representing a 16.6 percent return rate. With all ballots verified and counted, the results remain consistent with those announced last Tuesday evening, although these numbers now include ballots that were pending verification by the Los Angeles County Registrar/Recorder’s Office.

There were seven candidates who qualified for the ballot for the two City Council seats (in ballot order): Emily Gabel-Luddy (4,170 votes), Juan J. Guillen (2,324 votes), Sharon A. Springer (1,303 votes), Will Rogers (3,563 votes), Elise Stearns-Niesen (1,464 votes), Christopher J. Rizzotti. (2,378 votes) and David Nos (2,151 votes). No candidates received a majority of the votes cast and therefore two seats on the City Council will be filled at the General Municipal Election to be held on April 14, 2015, by two of the following four candidates: Emily Gabel-Luddy, Juan J. Guillen, Will Rogers or Christopher J. Rizzotti.

There were six candidates who qualified for the ballot for the three Board of Education seats (in ballot order): Steve Ferguson (5,107 votes), Armond Aghakhanian (3,710 votes), Roberta Grande Reynolds (5,362 votes), Jesse Tangkhpanya (1,886 votes), Greg Sousa (3,049 votes) and Vahe Hovanessian (2,971 votes). Steve Ferguson and Roberta Grande Reynolds received a majority of the votes cast and therefore are duly elected to office for a full term of four years, ending April 30, 2019. There being no other candidates receiving a majority of votes cast in the Election, one seat on the Board of Education will be filled at the General Municipal Election to be held on April 14, by one of the following two candidates: Armond Aghakhanian or Greg Sousa.