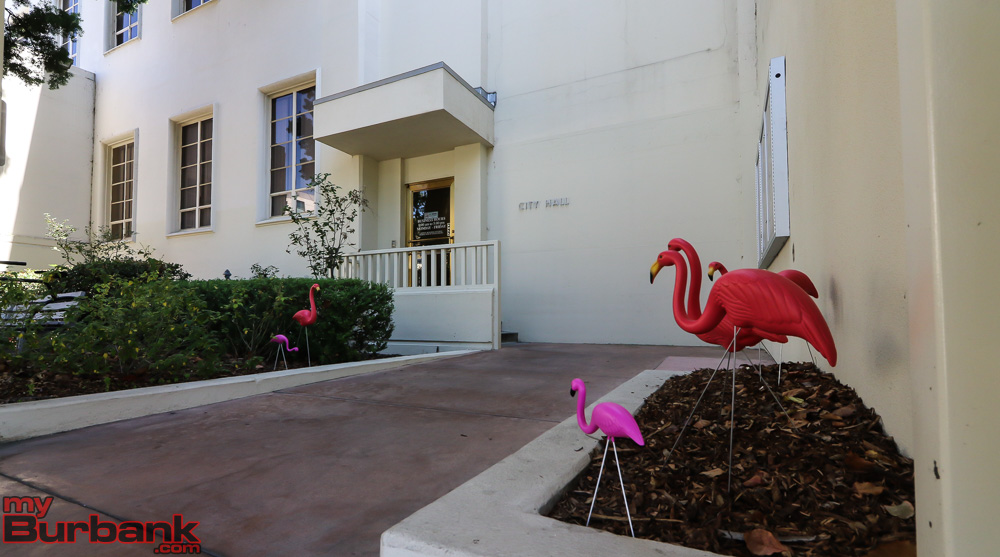 On Tuesday, September 26, several plastic flamingo lawn ornaments appeared at the back of Burbank City Hall to show support for Mayor Will Rogers who was recently diagnosed with stage 4 liver cancer.

The plastic flamingos are a nod to Mayor Rogers’ house which he lived in for a number of years when he jokingly crowded his front yard with the lawn ornaments.

His former neighbor Jill Herbertson had the idea to decorate the back of City Hall with the bright pink birds after hearing the announcement of his diagnosis on September 21. Although it has been a decade since they lived in the same neighborhood, Herbertson felt the need to pay tribute to the Mayor as he battles liver cancer and nonalcoholic cirrhosis.

Councilman Bob Frutos said that this declaration from Herbertson and others who have voiced their support for the Mayor represents the city’s “compassion” and “understanding.”

“A lot of people admire him for being willing to commit to public office,” said Councilman Frutos, on the Mayor’s resilience to continue as mayor despite his diagnosis.

Vice-Mayor Emily Gabel-Luddy, who is taking on a few of Mayor Rogers’ responsibilities while he spends some time away from work, sees the kindness expressed by many as a testament to Burbank’s spirit.

“The outpouring from the Burbank community is something I expect: we know each other and like good neighbors do, we support one another,” said Vice-Mayor Gabel-Luddy.

When Rogers first noticed the cliche lawn decorations outside the back of the building, he didn’t immediately make the connection as to what they were doing there. Soon, it was brought to his attention that they were in honor of his service to the community, and represented support from his former neighbor.

“I believe that the Mayor would love people to stimulate the conversation about cancer, and making sure your loved ones, once in their 50s, go get tested, and hopefully detect it earlier rather than later,” said Councilman Frutos.

Mayor Rogers is grateful for all the support shown to him as he endures treatment and seeks rest but also urges residents to donate blood and become organ donors to help others in need.

“I have heard Will say ‘give life,’ and I believe it means a lot to him to hear about folks donating blood, signing up to be organ donors and in other ways contributing to health organizations that provide people new beginnings and enhanced survival when they face life-threatening conditions,” said Vice-Mayor Gabel-Luddy.