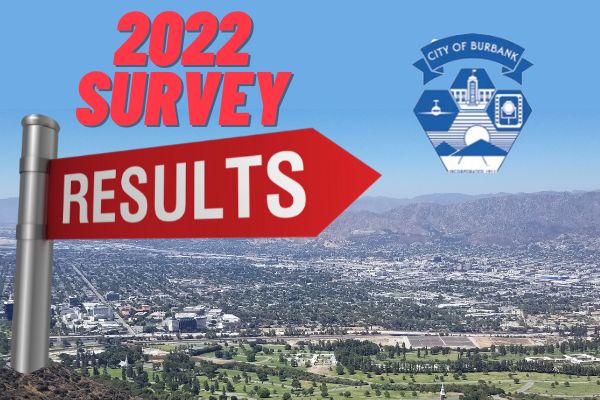 At the City Council Meeting on July 12, the City contracted Company FM3 Research reported on the survey they conducted recently.

FM3 contacted City of Burbank registered voters randomly by telephone, email, or text message and invited them to participate in the survey. In all, 590 total interviews were conducted by telephone and online.

The survey delved into several areas. When people were asked what they liked best about living in Burbank, 31% said the “Safe/police/low crime/fire department.”

When it came to what citizens wanted the City to do more about. The number one answer was homeless at 22%, followed by Crime and Housing/Rest Costs at 14%, Overdevelopment along with speeding on Burbank streets both came in at 13%.

Regarding city services to residents, 16% say they are excellent, while 52% replied that they are good. Fire and paramedic services topped the list as the first pick with 70%, followed by refuge services (64%) and then by park and public space maintenance which 60% of the respondents were very satisfied.

On the homeless issue, the number one issue was residents’ health and safety on local sidewalks, parks, and other public areas (55%), while the concern about the health and well-being of people living on the street came in at 40%. People believed by over 95% that the responsibility for addressing the homeless problems was equal between the City, County, and State.

“I am very pleased with the results of the Community Opinion Survey, and even more excited to learn that nine-in-ten residents said Burbank is an excellent or good place to live,” said City Manager Justin Hess. “These positive data points and views about the work we’re doing in the City are a reflection of the advocacy from our City Council Members and the hard work of our City staff,” said City Manager Justin Hess in a printed statement.

To view the poll in its entirety, CLICK HERE