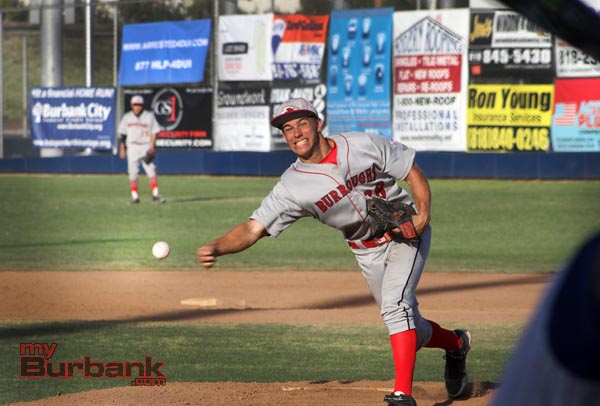 Cole Meyer was dominant as he has been all season (Photo by Ross A. Benson)

Ahh, the joy of victory. It wasn’t quite the same feeling of winning a league championship as it was a year ago. Clinching a berth in the CIF playoffs and sweeping your crosstown rivals, however, was the next best thing for Burroughs coach Craig Sherwood. 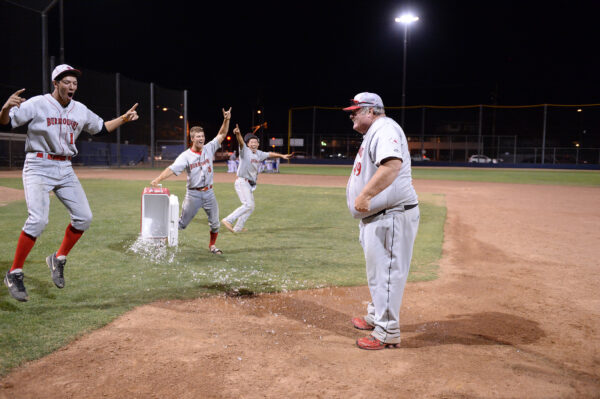 A year ago as an assistant coach at Burbank High School, Sherwood celebrated the program’s first league title since 1991. A year later, his players at Burroughs showered Sherwood with a bucket of ice water to revel in the team’s 5-0 victory over Burbank that secured fourth place in the Pacific League and an automatic entry into the postseason.

Burroughs (14-13, 7-7) began the evening one game ahead of Burbank (8-15, 5-9) and Hoover for the last playoff spot. A victory would guarantee the Indians another week of baseball where as a loss would have caused too many headaches and tiebreakers to deal with.

As it was at Burbank last season, this year’s success was a team effort. Everyone earned the accomplishment. No one individual was bigger than the team. Not from the coaching staff down to the players. 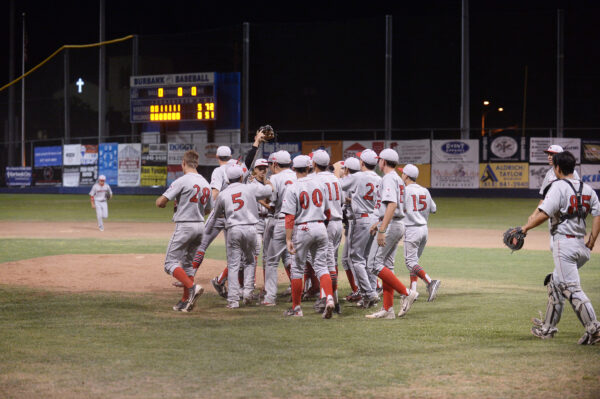 “It’s a big step for us. With one returning starter back, we accomplished the same thing as last year’s team did that was basically senior-ridden,” said Sherwood, who took over at his alma mater back in the fall. “I’m glad they stepped up.”

The Indians will learn their playoff fate on Monday morning. A likely matchup at a league champion such as Camarillo or Buena is a strong possibility.

“If you don’t get in, you don’t have a chance to win,” Sherwood said.

Now the chance is there. Anything can happen in the playoffs.

As they have been doing all year long, the Indians rode the arm of submarine specialist Cole Meyer to victory. Meyer threw six innings of shutout ball, giving up five hits, three walks and striking out eight.

Max DeAmicis slammed the door in the ninth by striking out the side.

Meyer lowered his league ERA to a minuscule .84 and 1.17 for the season. In 13 innings against the Bulldogs this season, Meyer allowed zero runs, seven hits while fanning 16. 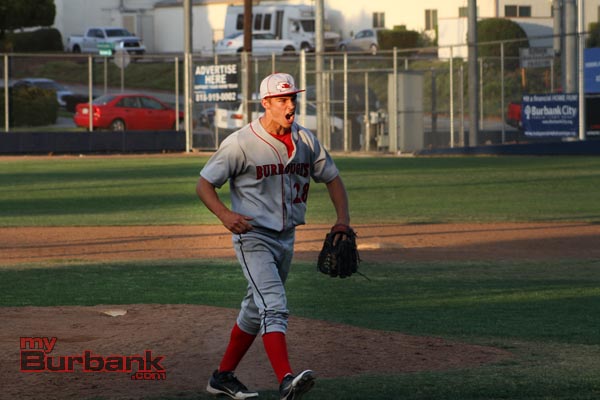 Cole Meyer reacts after striking out the side with the bases loaded (Photo by Ross A. Benson)

“Cole is a senior and he stepped up,” Sherwood said. “He’s been our number one guy all year and he did what a number one guy does. He goes out and battles. In that one inning, he rose right up.”

After Cameron Rodriguez drove home pinch-runner Ronny Jimenez on an RBI single in the top of the third to give JBHS a 1-0 lead, Burbank loaded the bases on an error, walk and hit in the bottom half.

But Meyer “rose up” to the occasion and proceeded to show everyone in attendance why he is one of the top two pitchers in the Pacific League. Meyer struck out the side as Danny Porras (2 for 3, double), Randy Higgens and Conner Lockheimer could not come up with the clutch hit.

“I had the defense behind me. They came out to play,” Meyer said humbly. “I appreciate what the defense did tonight. I didn’t have to strike everybody out but it ended up that way by accident. A happy accident.”

Burroughs added single runs in the fourth, fifth, sixth and seventh innings to cement the victory. 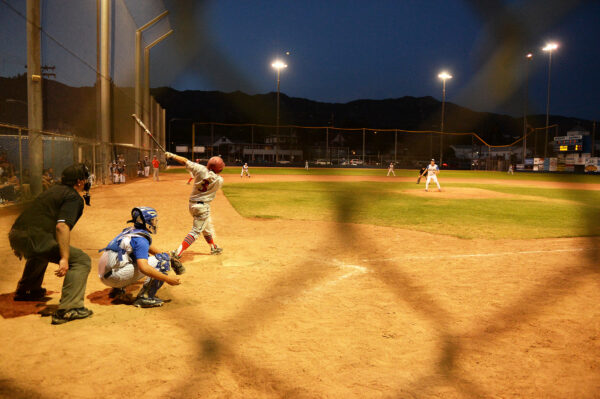 DeAmicis and Anthony Robles had RBI doubles in the fifth and sixth innings, respectively, and Gerardo Munoz drove in the game’s final run on a pinch-hit single in the seventh.

Rodriguez went 2 for 4 with a run scored and knocked in the game-winning RBI in his final game against Burbank. All Meyer needed was one run just as he did in Burroughs’ 1-0 win against BHS back on April 25.

“Cole (Meyer) kept saying, ‘Just get me a run. One run,’” Rodriguez said. “I was getting real nervous. I was scared it was going to be my last baseball game ever. So I came into this ready to play my heart out. It’s huge.” 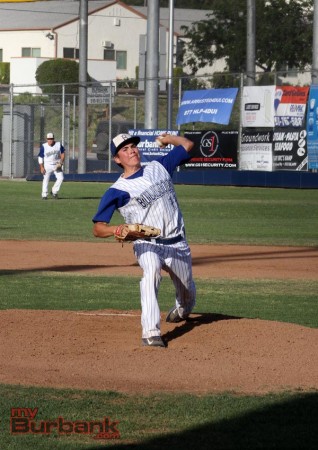 Ryan Porras had a solid effort in only his second start of the season (Photo by Ross A. Benson)

Burbank has a bright future with Ryan Porras, Danny Porras, Cameron Briggs, Andy Reyes and Higgens all returning. Ryan Porras made his second start of the season and pitched well going four and a third innings and limiting the Indians to four hits, one earned run and recording nine strikeouts.

With only one returning starter and a handful of varsity lettermen back from 2013, the youthful and inexperienced Indians grew up just in time to earn a trip to the postseason. Their roster is filled with 16 juniors, many of whom have seen plenty of action this year.

“It feels great. A lot of weight off my shoulders,” said Meyer, one of eight seniors on the team. “We were sitting there biting our nails. Now we are in and I couldn’t be happier.”

Last season Sherwood celebrated on Burroughs’ field as a member of the Burbank staff. Last night he celebrated on Burbank’s field as the proud coach of the Burroughs Indians. Just another memorable day in the life of a coach whose passion for baseball remains constant and unwavering.

Ryan Porras had a solid effort in only his second start of the season (Photo by Ross A. Benson)