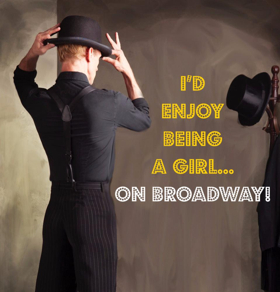 I’d Enjoy Being a Girl … On Broadway! stars writer, performer and dancer Mark C. Reis in a solo show directed by Michele Lynch. The humorous show is choreographed by Lisa Mandel, with musical direction by Scott Harlan.

Reis, a Broadway veteran, uses music and dance to explore continuing his career and consider how his success may have been different had he been a girl. Most recently Reis was seen in Mary Poppins at MTW and Spamalot with 3D Theatricals. He currently appears in the live Frozen show at Disneyland.

“I am thrilled to have my work included in the Colony’s It’s Showtime! series,” commented Reis. “I’ve always loved the theatre and dreamed of performing there. I never thought it could happen, but here I come!”

With music and lyrics by Stephen Sondheim and a book by Hugh Wheeler, A Little Night Music in Concert is directed by Laura Stribling and features musical direction by Jennifer Lin. Sarah Jo Provost serves as assistant director. The show is produced by Noelle Berry, Carly Bracco, Liza Baron and Marc Ginsburg.

“This concert presentation is the first in a series committed to creating a platform where beautiful scores come to life focusing on diversity in casting and featuring talent that is often underrepresented,” said Colony Theatre Director of Development Heather Provost. “The series will encourage women to step off the stage and into leadership roles behind the scenes.”

Admission for both shows is $35 and tickets may be purchased online at www.colonytheatre.org or by phone at (866) 811-4111. The Colony Theatre is located at 555 N. Third Street (between Cyprus and Magnolia) in Burbank, 91502. Plenty of free onsite parking is available.