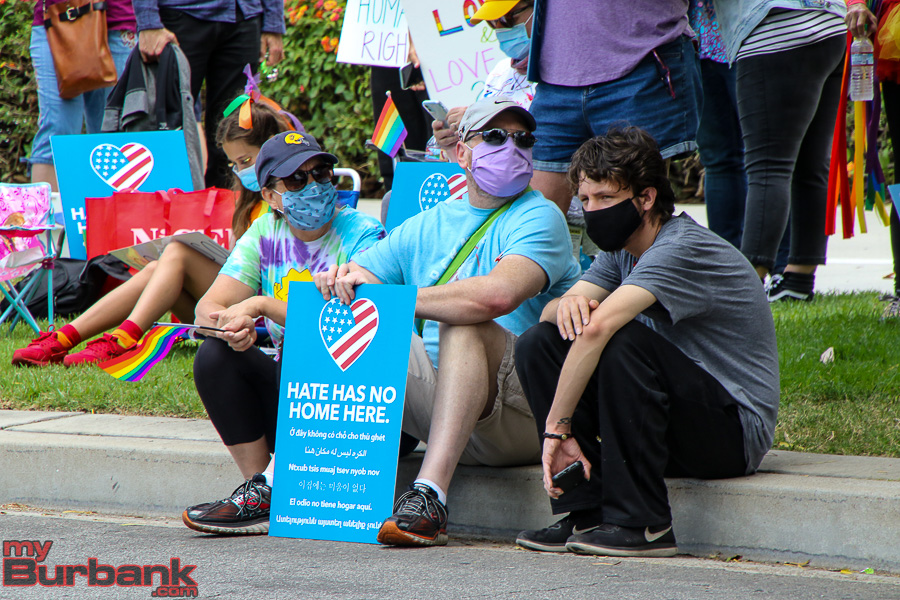 On Saturday, June 6, a group of Burbank community members gathered along the Chandler Bikeway to show support for a fellow resident who has been the target of repeated prejudiced behavior in the neighborhood.

Burbank local David Aaron moved to town four years ago from Portland, Maine, and quickly found a new residence on the bikeway along Chandler Blvd. Although Aaron generally loves the area, he says that continued homophobic harassment from one neighbor has made his living situation a very distressing ordeal.

“She knows that I am an openly gay male, and she quotes Bible verses as I walked by her house,” Aaron said. “She tells me that I’m going to hell. She swore at me one time as I was on the sidewalk and sprayed me with her garden hose…And this one time she was standing right at the gate and she said, ‘Get away from me. I don’t want to catch AIDS.’”

Beyond harassment aimed at himself, Aaron says that there have been additional accounts of the neighbor yelling threatening insults at people of color around the neighborhood.

“She’s taken it to a different level where she hones in on someone’s identity, whether it be the young man of color…who had gotten off his bike to rest in the shade of a tree on the bike path and she screamed at him to go home… or the Indian family that had parked in front of the block to unload their bicycle to ride on the bike path,” Aaron explained. “She just screamed at them to go back to their country.”

Aaron has attempted to work with the Burbank Police Department (BPD) regarding the verbal attacks since January of 2019. He follows their advice of avoiding the neighbor as much as possible, but, in spite of this, there have still been attacks in one form or another.

“[The cops] came and knocked on my door one day because she said that I had thrown a cigarette butt into her yard,” Aaron recalled. “I don’t smoke. I said to the officer… ‘Anytime anything happens to her, she blames that on me because I seem to be the most visible target for her.’ She doesn’t like me. She doesn’t approve of my, quote, ‘lifestyle.’ So if anything goes wrong, she blames me.”

Last Wednesday the harassment intensified when Aaron found that someone vandalized his car by twice inscribing the word pedophile (misspelled as “pedofile”) on the side and roof of the vehicle.

“She often calls me a pedophile,” Aaron said. “So that’s why [when] I came out of my house last Wednesday and saw “pedofile” carved into my car I knew immediately that it was her because no one else has ever called me that in my entire 56 years of age.”

Amidst the hardships brought about by the COVID-19 epidemic, this encounter with hateful vandalism left Aaron feeling devastated.

“Like many people affected by COVID, I haven’t been working,” Aaron said. “I’ve been worried about money, stress and anxiety is my daily routine. So when I saw that on my car on Wednesday, it literally ruined me. I just was a mess.”

The crime is currently under investigation with the BPD as a felony charge, but local officers have told Aaron that it doesn’t classify as a hate crime.

Following this series of events, Aaron reached out to a local friend of his, Laura Adler, who sent a message out to the community in hopes of finding some video evidence or witnesses to move the case along faster. Community member Kate Crandall responded to speak in support of Aaron, and together the three came up with the idea for a show of support for equal rights.

Entitled “Show of Love,” they planned for a meeting “to show solidarity in the belief that love is stronger than hate, that communities of color, gender identity, or sexual orientation will not be intimidated.” The gathering took place on June 6 and had over 125 attendees along the Chandler bike path standing in solidarity with the belief that Burbank is “No Place for Hate.”

“The message was really loud and clear,” Aaron said “Don’t intimidate our neighbors or our friends because we will show up for them. That’s what we’re seeing kind of worldwide right now. Don’t intimidate our friends of color because we are going to show up for them. So it’s kind of a universal message right now. We obviously covered everyone saying we’re all in this together.”

Aaron has a background working in nonprofit organizations specifically related to public service, and says that in spite of difficult experiences he remains dedicated to human rights with the belief that the future will place emphasis on individual character.

“My hope is that we just look beyond the labels and judge people by their character and their morality and what they contributed to society,” Aaron said. “It’s like being a human being. Being the best possible human being is all that matters.”