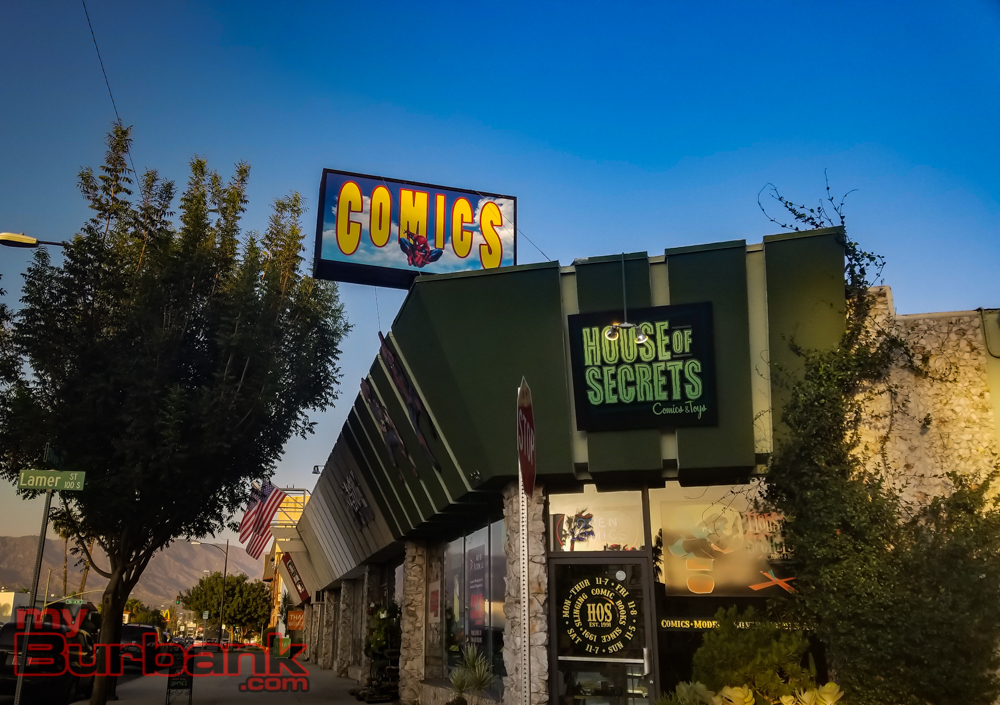 According to the shop owners Erik Warfield and Paul Grimshaw, House of Secrets relocated from La Cañada Flintridge to Burbank in 1996 for its “greener pastures and access to studio clientele.” Since the move, the owners have maintained the status of separating themselves from stiff competition in Los Angeles by offering a “larger variety than most stores.”

Their formula seems to be working. House of Secrets has many longtime customers, including co-creator and producer DJ Wooldridge. On the subject of those behind the counter at House of Secrets, Wooldridge said, “Paul, Erik, and Amy aren’t just the people that work at my favorite shop, they are my friends. They are the first people that made me feel welcome in my new home city, on a whole new coast. Finding the right shop is about finding a place that fosters a community that you want to be a part of and is welcoming. That last part is pretty important, especially for people that are just getting into comics for the first time. The comics community can be pretty insular, good shops make every new visitor feel like part of the family. Paul and the folks at House of Secrets do that in spades.”

Having spent a couple of decades here in Burbank, Paul’s enjoys Burbank’s “small town feel” and being able to shop locally. Erik feels the same way, adding that he enjoys eating at Don Cuco’s on Orange Grove Ave. Before either of them began living their dream of owning a comic book shop, Paul worked at Wire and Cable operations and sales. Erik worked in the Insurance industry and waited tables. Now the two enjoy the freedom of doing what they love.

In dealing with comic books, it is not unusual for a shop to buy and resell vintage books. The most expensive comic book ever sold at the shop was Amazing Fantasy 15, which sold for $4,500 dollars. Still, owning a shop doesn’t come without its pitfalls. According to Paul and Erik, “owning a store in Burbank is harder every year [with] insurance, fee’s, and permits increasing annually.”

To help business, House of Secrets regularly hosts events, often supporting independent comic books or small companies. Today, there is a signing for Chaos Theory, with creators DJ Wooldridge and Tom Neely in attendance. Wooldridge, who also co-hosts the podcast “Only Stupid Answers” with Sam Bashor, had a lot to share about House of Secrets, and their importance to the Burbank community.

“House of Secrets is literally the first place I stopped when I got to Burbank for the first time,” said Wooldridge, “I had driven out from Florida, spending a couple weeks on the road, and hadn’t been able to grab any comics in all that time. So the second we settled I hit up the nearest comic shop, which just happened to be House of Secrets. Amy Dallen was working the register and the place had such rad atmosphere that it quickly became my home shop for the years I lived in Burbank. I unfortunately no longer call Burbank home, but House of Secrets is still my ‘home’ shop and drive over as often as I can to pick up my books.”

To read more about Only Stupid Answers and Chaos Theory, you can find a short synopsis of each below:

Only Stupid Answers – “You want a way to celebrate the things you love? Whether it be movies, tv shows, comics, or other podcasts, Only Stupid Answers is a podcast you need. You can join us weekly for our reviews, our recommendations, or our silly opinions on which is better: Marvel or DC? We drop new episodes every Monday morning on every platform you can think of.”

Chaos Theory – “Chaos Theory: Zombies VS. Dinosaurs are the comic you never knew you always wanted. I like to describe it this way – You know at the end of the Dawn of the Dead remake where the remaining survivors sail to a tropical island to escape the zombies? Well, what if that island was the one from Jurassic Park? From there, its a crazy action-adventure ride with a little bit of heart for good measure, as a handful of survivors struggles against the onslaught of the undead and the extinct. Hopefully it’s as fun to read as it was to write.”