This couple had a sweet beginning.

Harold and Edna Owings of Burbank met in fifth grade, and to sweeten her interest in him, Harold would bring candy bars to school for her from his dad’s candy store. 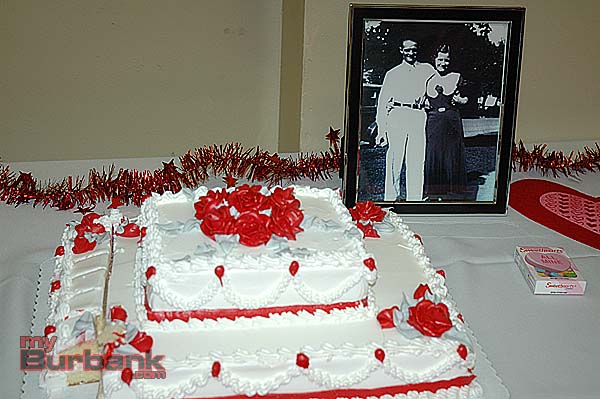 An early photo of Edna and Harold Owings was displayed next to a celebratory cake. (Photo By Joyce Rudolph)

They exchanged vows on Thanksgiving Day in 1931. Now she’s 101 and he’s 102, and they say they are still very much in love after 82 years of marriage.

The couple received the title Longest Married Couple in the United States from Worldwide Marriage Encounter, based on nominations submitted from October through January. Worldwide is a faith-based marriage enrichment program that has offered weekend retreats for married couples for more than 45 years. 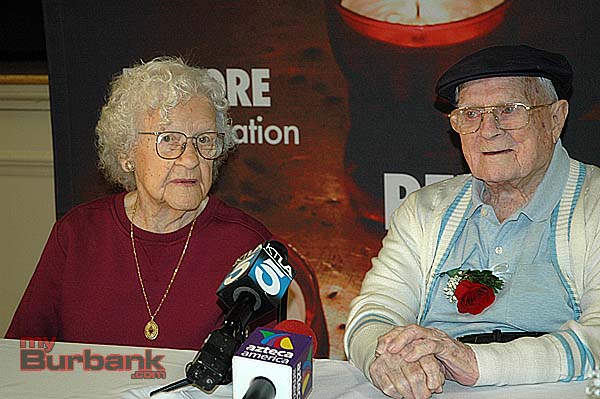 Edna and Harold Owings say being considerate to each other and not spending beyond their means
Kept them from arguments. They just stayed happy, they said. (Photo By Joyce Rudolph)

The Owings were honored during a celebration with family, friends and news media on Valentine’s Day at Bellarmine-Jefferson High School’s St. Eleanor Hall. Accolades received include a certificate of recognition from Burbank Mayor Emily Gabel-Luddy, mention in the Congressional Record and still to come, congratulations from President Obama and Gov. Brown.

Ron Pekny of Worldwide Marriage Encounter thanked Dick and Diane Baumbach, Worldwide’s North America media coordinators, for having the dream to celebrate the permanency of marriage, to show young people that couples can go the distance. Ron and his wife, Judy Pekny, are from Fort Worth, Texas, and serve as Worldwide’s U.S. Leadership team with Father Rocky Grimard. 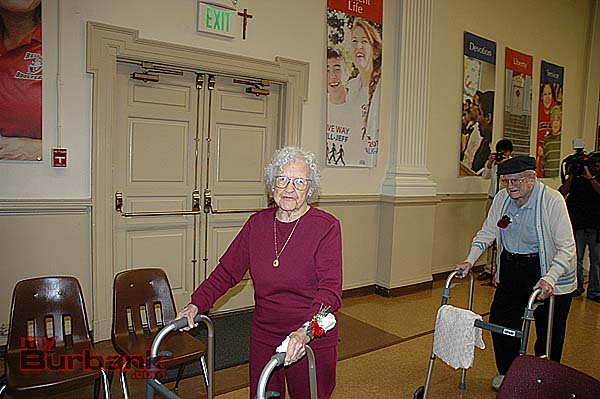 Daughter-in-law Doris Owings was married to the couple’s son Gene for 50 years. Doris and Gene moved the couple to Burbank from Florida 10 years ago. Gene passed away two years later.

Harold and Edna have always been happy, Doris said.

“Mother calls the shots and Dad gives in,” she said. “All they do is eat a lot of sweets and that seems to work for them. And don’t push this diet on them. It’s all fried food, Cokes and candy.”

Edna said being married to Harold has been really easy.

“It doesn’t seem like it’s been that long to us at all,” she told the more than 25 people attending.

Edna suggested that couples should keep busy, be best friends and stay happy.

“We’ve planned things together,” she said. “It helps to be considerate of others.”

Edna called theirs a storybook life.

“We’ve traveled, we had two beautiful children and now our children are deceased but they left us  with a beautiful family that is wonderful to us and we could not ask for more,” she said.

And on that note, the couple kissed.

“We never went to bed mad at each other,” he said. “We never had money problems. We never bought anything we couldn’t pay [cash] for and that makes a big difference.”

One memorable trip the couple took was to Essen, Germany, to see their daughter Charlotte vie in the Dance Team event in the 1966 World Roller Skating Championships. Charlotte was a member of the America on Wheels, which was part of the U.S. Team. Highlights were shown on the Wide World of Sports TV program.

She came in second place, Harold said, but even the couple who won it said Charlotte and her partner had out skated them.

Granddaughter Carla Schneider is inspired every day by them.

“They illuminate love,” she said. “They can’t go anywhere without each other. They are so active and independent. They are happy and healthy and an inspiration to people.”

For their Valentine’s Day lunch, Schneider said, they would probably want to go to the Coral Cafe for biscuits and gravy.

“They traveled a lot and I think that’s what kept them going. She does gardening and he just did whatever she told him to do,” Schneider quipped. 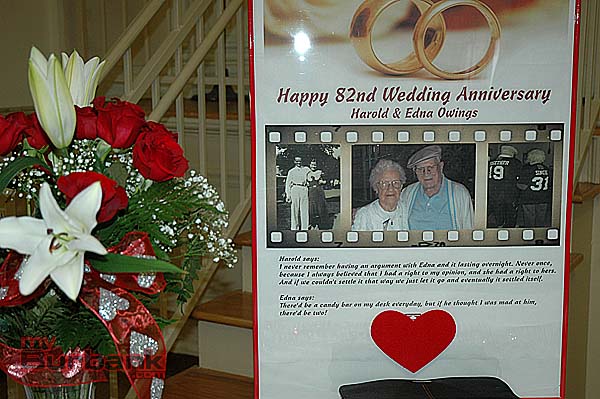 Decorations around St. Eleanor Hall included a poster of quotes from Edna and Harold Owings. (Photo By Joyce Rudolph)