Several Burbank witnesses swear they’ve seen the Coyote Man, up until now regarded as a myth.

“The full moon was shining,” begins one witness. “My wife and I were walking along Walnut, next to DeBell.  Then we hear a bunch of coyotes yipping, except that one of the yippers sounded odd.” 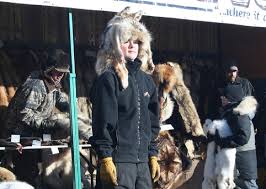 When he and his wife turned in the direction of the sound, they saw a young man, naked but for a loincloth, in the middle of about six coyotes. “It’s like he was the leader of the pack,” added the witness.

Another witness was hiking with her sister along the Verdugo ridge, near the forested Fire Warden’s Grove. “We rounded a curve and found ourselves face-to-face with that mountain lion. [Ed. Note, the same one that’s been in the news] Suddenly a young man, naked but for a loincloth, leapt on the back of the mountain lion and pinned it to the ground.” The sisters immediately fled in the other direction. “I can still hear his   triumphant coyote yipping as we raced down the hill,” said the witness.

According to legend, the Coyote Man was a toddler who wandered away from his parents. And though he was lost to civilization, a band of friendly coyotes—who had just eaten–discovered him and raised him as one of their own. Occasionally Coyote Man was spotted deep in the San Gabriels, but the sightings were discounted because the witnesses were usually drunk.

“Maybe that big fire made Coyote Man migrate to the Verdugos, just like that mountain lion,” speculates one of the witnesses. “But it seems like he’s definitely on our side.”