Behind a dominating effort from sophomore right-hander Brian Gadsby and the timely hitting of senior shortstop Teddy Boeke, the Falcons came up with an important 3-0 victory on the road. Gadsby retired the final 11 Burbank hitters en route to a three-hit shutout.

“Brian (Gadsby) did a great job. He didn’t have his best stuff but he battled and we played some pretty solid defense behind him,” Crescenta Valley coach Phil Torres said. “It’s always tough to win here so tonight was a nice one to get.” 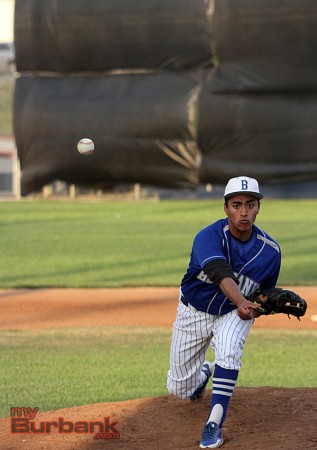 Burbank senior ace Angel Villagran pitched a solid game as well with the exception of one mistake in the fifth inning. Villagran threw a complete game four-hitter allowing no earned runs.

“I thought Angel (Villagran) did a very good job for us,” Burbank coach Bob Hart said. “We didn’t play to our level. In terms of sticking to the plan a little bit, I think we got away from it. I thought their guys did a good job particularly the guy on the hill.”

Villagran, who came into the game with back-to-back shutouts against Hoover and Glendale, surrendered the game’s first run when the Falcons’ Bryan Wang cashed in on a Bulldog error by singling home Boeke in the first inning to give CV an early 1-0 lead.

The Bulldogs threatened in the bottom of the third inning when Chris Okimoto singled and advanced to second on an errant pickoff attempt by Gadsby. With no outs, Burbank shot itself in the foot with a fly out and two consecutive ground outs stranding Okimoto at third to end the inning.

Burbank (6-7, 2-1) came right back in the bottom of the fourth looking to break Gadsby’s stronghold. With one out, Hector Rodriguez singled and advanced to second on another Gadsby throwing error. After John White grounded out to shortstop for the second out, second baseman Nick Diaz and first baseman Adrian Damla combined for the play of the game.

Villagran hit one up the middle that Diaz ranged to his right to field. Diaz fired a one-hopper in the dirt that Damla stretched and snatched up for the third out preventing Rodriguez from scoring.

“They did a better job of swinging the bat in certain situations. We did not do a good job,” Hart said. “We had guys on third base a couple times and did not get them in. Situational it was not good for us.”

Crescenta Valley (11-5, 3-0) gained some breathing room in the top of the fifth inning when Boeke crushed a two-run home run off Villagran over the left field fence. It was the first home run hit to that part of the field in several years. 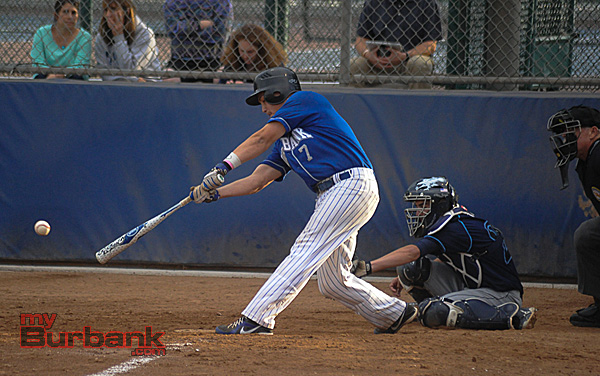 Harrison Hernandez had the only other hit for Burbank. Gadsby cruised the rest of the way inducing eight groundouts from the last nine Bulldog batters.

“I thought I did pretty well,” said Gadsby who throws submarine style. “When you have a great catcher and a great guy calling pitches, I’m just doing what our coach wanted us to do. It felt good. It was a good victory.”

Crescenta Valley will now play Burroughs on Tuesday at 6 p.m. at Stengel Field while Burbank looks to get back on track hosting Pasadena at 3:30 p.m. The Indians will face Boeke on the hill who threw a no-hitter against Loyola earlier in the season. CV shows no signs of a shortage of quality pitching.

“Every game is a big game because everyone is kind of equal. I don’t think there is one team that is way better than the other ones,” Torres said. “Burroughs will be a fun game and we will be ready for them.”

“I think we are going to compete hard. Burroughs is a really good team and hopefully we will pull out a victory,” Gadsby added.