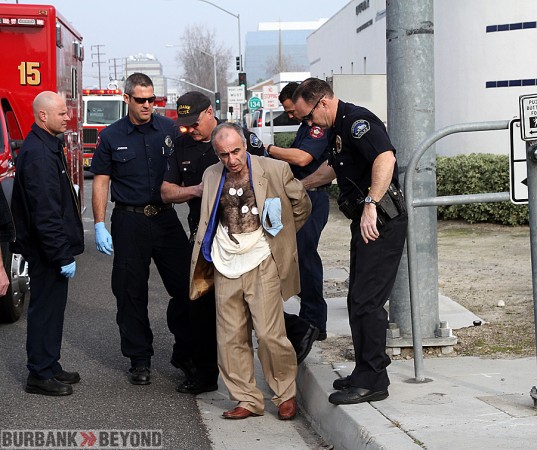 Burbank Police take Artur Khalatayn of Glendale into custody after being identified by Von’s Loss Prevention and other witnesses. Burbank Paramedics checked him out prior to transportation him to the hospital. (Photo by Ross A. Benson)

Burbank Police received a call from Vons Market at 301 N Pass Avenue Tuesday afternoon that their  stores security had tried to stop a well-dressed man who had just stolen a shopping cart full of meat and was making a run for it through the parking lot.  The suspect was described as wearing a tan suit and tie.

Upon arrival police found that the man had reportedly become physical with the store loss prevention officers, throwing a couple of punches before fleeing the store with the stolen beef.  Security was able to recover the merchandise from the man before he fled.  Burbank Police officers were able to catch the suspect several blocks away, at the intersection of Alameda Ave. and Hollywood Way, where witnesses had followed him.

Arrested was Artur Khalatayn, 45, of Glendale.  Upon his arrest, the suspect claimed he was having trouble breathing.  Officers immediately called for Burbank Paramedics, who were able to treat the man before he was transported to Providence St. Joseph Medical Center.

The suspect was admitted into the hospital due to chest pains.  He has a court appearance at the Burbank Superior Court on February 26,at 8:30 am.

Burbank Police take thief suspect into custody after being identified by Von’s Loss Prevention and other witnesses.(Photo by Ross A. Benson)