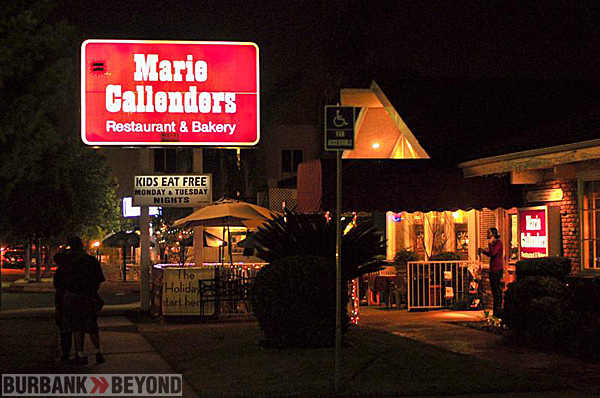 Turkey Pot Pie? Potato Cheese Soup? Slice of Razzelberry pie? Which famous dish was I going to choose to be my last meal at Marie Callender’s? Last meal you ask? Well, after four decades of being a Burbank/Toluca Lake landmark, the famous establishment will be closing their doors forever on January 2, 2012. In its place will soon be another branch of Chase Bank. That will make the second Chase Bank location just a few blocks from the other, on Riverside Drive.

As I sat at the counter and ordered the potato cheese soup, I watched for expressions of the soon-to-be unemployed staff members as they scurried around the packed-house restaurant. There wasn’t anything different in the air… The beautiful lighting, solid oak tables and chairs, the unique high-back booths, large fans, charming knick knacks and the hard-working staff, were all the same. Except for the knowledge I had learned the night before, Marie Callendar’s would soon be a distant memory.

It was my first place of employment right out of high school. I was their first sandwich delivery girl ever hired. It was so exciting delivering food to Warner Bros, Disney Studios, Dick Clark Productions, many other post-production houses and to the set of my favorite soap opera, Santa Barbara on the NBC lot.

I even sold Tommy Chong a sandwich or two. Back at the counter, our customers and staff were always entertained by Jonathan Winters. Waiting on him was the highlight of any waitress’ day. He never failed to make us laugh with his kind, jovial spirit and famous smile. Needless to say, he was always the charming, famous, adorable funny man you would see on TV. Even as a teenager, I knew I was talking to a legend.

Not only is Marie Callendar’s known for their amazing pies, but for their burgers, chicken pot pies, and not to mention their famous potato cheese soup, which I savored as I struck up conversations with the staff members. Waitress, Adelina Adamyan stated, “I have been working here 7 years and this is so sad for me. It’s like a second home. I have spent every holiday here. They’re [staff] my family.” One could not help but feel horrible for her situation, being so close to Christmas. She added, “We didn’t even know this place had been sold until we saw it online a few days ago”. The owners failed to inform their faithful employees that the doors would be closing permanently. Other sources have reported that the land was sold to Chase Bank for 4 million dollars this past year.

Katie Pessagno, another 7-year veteran said sadly, “We’re going through the grieving process now. You should have seen us yesterday during our denial stage. We only found out on Monday that they’re shutting down. A friend called me to tell me bad news”. After talking to a few more employees, I learned that even General Manager, Goyo De La Cruz had no idea that he would be unemployed right after the holidays. Ismael “Izzy” Sanchez has been working at MC since the day they opened, over 40 years ago. What happens to these people? Katie also admitted, “We had our annual Christmas party last night, but I was too depressed to go. I just stayed home”.

Busboy, Miguel Martinez, who has been gainfully employed at the restaurant for the past 5 years, quietly said, “I am very sad”. I then inquired if he was sending out resumes, he nodded, put his head down and then went back to work. I know I was not helping the raw emotions of the MC crew by asking questions, but I knew in my heart that I had to share their sadness with the community. I too, was in the grieving process. My family and friends have been coming here my entire life. My family took me to dinner to celebrate my high school graduation. That night was very memorable. The entire place was packed with fellow John Burroughs alumni and their families.

It is hard to reconcile that another landmark has fallen…

Night manager, Leanne Lawson informed me that the recent filing of Chapter 11 (bankruptcy) only affected the corporate level of Marie Callendar’s. The franchises were thriving and the employees were under the impression that they were safe from the national job loss catastrophe. “How many more banks do we need on this street, seriously?” protested, Leanne.

As I was tying up my interviews and paying my bill, MC regular of 20 years and local resident, Doug Menick sat at the counter to order his usual bowl of soup. That’s when Katie told him the bad news. The look of shock and disappointment flooded his face as he sat down. He shook his head in disbelief and said, “I feel so sorry for the workers. This is more than disappointing.” I wanted to give him my condolences, but I too was feeling the wave of sadness for my own memories.

As I was leaving, I met child TV star, Wayne Stam from the hit TV show, “My Favorite Martian” and Australian graphic novel artist, Peter Greenwood. They were viewing the first copies of a new book that’s coming out called, “My Favorite Martian. The Complete Series Volume One.” It was a bittersweet moment for them because they were celebrating the new book when I shared the grim news. Peter shook his head and said, “It’s pathetic. We don’t need another bloody bank.” Wayne added, “many business have started over coffee at this place. I formed my theatre company at Marie Callender’s many years ago”.

I took a few photos of the restaurant and didn’t ask the staff to smile, because it was not a celebration. They were more than kind to me and for that, I am thankful.

What would restaurant founder, Marie Callender, think about the swift, impersonal and untimely business decision? One would think that a fair and decent business owner would have handled this tough decision with a little more empathy and class. Seems cruel and unfair to treat such faithful workers in such a harsh manner.

I guess Ebenezer Scrooge is alive and well in the Toluca Lake area.