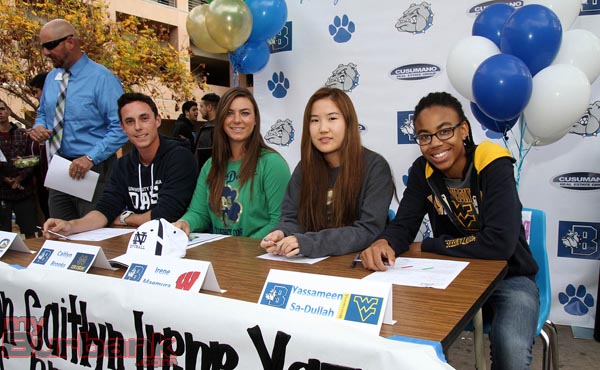 Burbank High School and John Muir Middle School each celebrated an event last week that brought fun and excitement to their respective campuses. 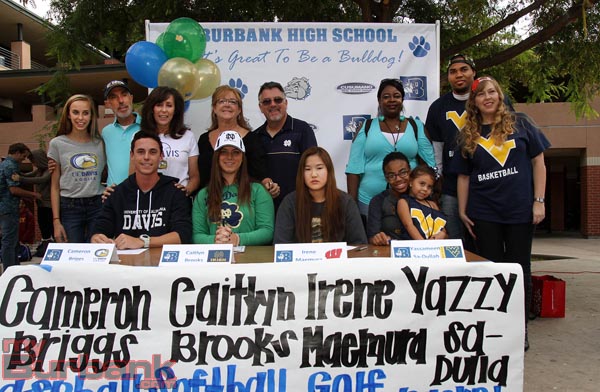 Family members join the quartet of Bulldog signees (Photo by Ross A. Benson)

Burbank High School celebrated four athletes who signed their National Letters of Intent to play at Division One schools in the 2015-16 year.

Cameron Briggs (UC Davis- baseball) Caitlyn Brooks (University of Notre Dame- softball), Irene Maemura (Wisconsin- golf) and Yazzy Sa’Dullah (West Virginia- basketball) achieved their goals of playing collegiately by being offered scholarships and then committing by signing their NLI with friends, family, coaches and teachers supporting them during a lunchtime ceremony. Congratulations to this special group of Bulldogs!

Coach Bob Hart on Cameron Briggs- “As a coach the greatest success is the personal growth and achievement of your players. I’ve watched Cameron mature on and off the field. His passion and competitiveness along with his willingness to do whatever it is it takes to win sets him apart. He’s talented and he works at his game. The future looks bright.” 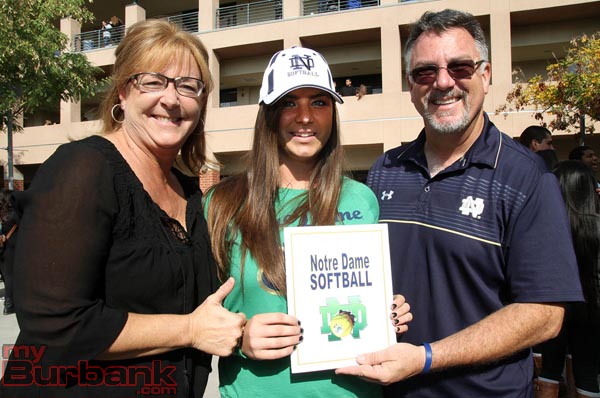 Alongside her mom and dad, Caitlyn Brooks signed with the University of Notre Dame and is considered one of the top softball players in the country (Photo by Ross A. Benson)

Coach Mike Delaney on Caitlyn Brooks- “Caitlyn is very deserving of her scholarship. She has worked extremely hard both on the field and in the classroom. She sets a great example for our current and future student-athletes.”

Coach Branko Sevic on Irene Maemura- “It was a pleasure watching Irene grow as an individual and into an exceptional player. One could see the improvement in her game from year to year, as she worked hard to reach her goals. It will be a while before we get someone at Burbank with her skill level and work habit. She will be missed at Burbank, but Wisconsin is getting a great individual and a great player.” 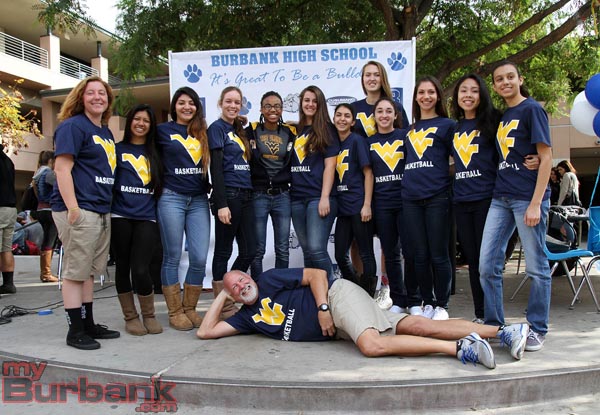 Coach Bruce Breeden on Yazzy Sa’Dullah- “In my 17 years of coaching girls basketball I have some good basketball players, but nothing like Yazzy. Since she has transferred here she has been a team player. She has lifted this team to a higher level. I am very proud to have the opportunity to coach Yazzy and watch her grow at the next level. It is great to be a Bulldog.”

Meanwhile, the LA Kings Street Hockey team returned to Burbank to donate equipment to John Muir Middle School while providing lessons and teaching fundamentals to the students in attendance. Last year the LAK made a similar kind of gesture and donation to Jordan Middle School.