myBurbank will be giving away tickets to see this great special Dr. Who show in 3D at the Burbank AMC on Monday, November 25 at 7:30PM.

Visit us at our table by the UMe Credit Union Friday Night during Magnolia Park’s ‘Holiday in the Park” to win some of these great tickets. 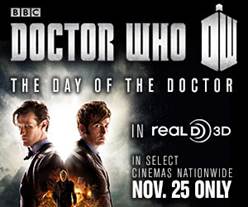 NCM Fathom Events and BBC AMERICA are thrilled to celebrate 50 years of the world’s longest-running Sci-Fi series Doctor Who with an explosive Real D 3D presentation of the Doctor Who 50th Anniversary Special: The Day of the Doctor. This extraordinary one night event will take place in select cinemas nationwide on Monday, November 25 at 7:30pm (local time) with additional show times being added in select locations.

The Doctors embark on their greatest adventure in this 50th Anniversary Special: in 2013, something terrible is awakening in London’s National Gallery; in 1562, a murderous plot is afoot in Elizabethan England; and somewhere in space an ancient battle reaches its devastating conclusion. All of reality is at stake as the Doctor’s own dangerous past comes back to haunt him.

But that’s not all. After the special, be sure to stay in your seats for The Day of the Doctor: Behind the Lens, a special behind-the-scenes featurette featuring interviews with the stars as well as writer and showrunner Steven Moffat.

Doctor Who 50th Anniversary Special: The Day of the Doctor
http://www.fathomevents.com/#!doctor-who-the-day-of-the-doctor