The price tag for a smile is something some Burbank residents found out is simply priceless.

That’s how they felt after volunteering in a Life Rolls On event at Santa Monica State Beach Saturday morning.  There they helped a number of individuals in surfing, some of which were in the ocean for the first time. 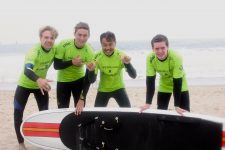 Burbank residents celebrate after helping another athlete back to shore. (Photo courtesy of Shannon Sauvé)

Life Rolls On is a group that organizes athletic events for those with paralysis. The events are also far from the ordinary, making everyone involved feel as if anything is possible.

Cliff Roll and his son, Ford, who will be a junior at Burbank High, have volunteered for Life Rolls On for three years. Cliff initially learned of the group through his job. They have helped a number of individuals with physical disabilities to have life-changing experiences.

“Every single picture that we have they have a smile on their face,” Ford Roll said of the athletes who participated.  “They are really enjoying it and having the time of their life. It’s an amazing experience seeing them enjoy what they want to.”

An athlete prepares to go into the ocean. (Photo courtesy Shannon Sauvé)

Ford said each athlete was given about 30-40 minutes of surfing.

“When the parents cut them loose, they are incredibly nervous,” Cliff Roll said. “Our job is to keep the parents calm and make sure they’re not going to panic. Once the kids get back on shore, they use lines like I’ve never felt so free, I felt like I was flying. This is what I want to do forever. One child said this is the first time I’ve been happy in a wheelchair.”

Ford Roll said he has seen some people return from previous years for the event.

“We had one kid from Arizona just to surf for the day,” he said.

Ford Roll explained how he and the estimated nearly 500 volunteers assist the surfers.

“As a team we get them past the breaking waves and we push them on the board and we have one person who is a little more experienced, who we call a water leader,” Ford said. “They sit on the back of the board and make sure they have a good time.” 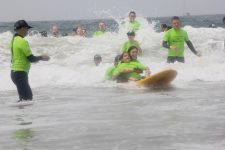 Cliff Roll said the experience leaves a great deal of emotion for everyone involved.

“Everybody is so happy when so the smile on the athletes faces,” Cliff said. “They start off timid and then when they catch their first wave that smile just doesn’t leave their face and everybody involved is smiling.”

Ford Roll said he is so impressed with how the surfers are not afraid of the challenge.

“They don’t let their disability control how they live their life,” Ford said. “They want to get out and have fun.”

Scott Sauvé, who learned of the event through the Rolls, said the experience was worth it.

“Seeing the smiles on the surfers’ faces brings a great deal of happiness, and I will definitely be at Life Rolls On again,” he said.

Shannon Sauvé, who took pictures of the event, said she felt like she had the best volunteer job.

“I had the somewhat unique experience of being able to focus in on the athletes and really see their faces,” she said. “I wish everyone who worked the event could have seen the athletes’ expressions and known how much this event meant to the athletes and their families.”