The emergency call went out and Burbank Police & Fire Departments responded for the umpteenth time that a car had hit the house at Vanowen & Buena Vista Streets.

Actually it was close but a car didn’t hit the house this time as the barriers that have been installed to prevent that from happening did what they were supposed to. The car with two female occupants attempted to catch the light at a higher speed than intended for the road and missed the turn from eastbound Vanowen Street and the driver fearing the car would overturn and went straight and hit a concrete barrier in the driveway. 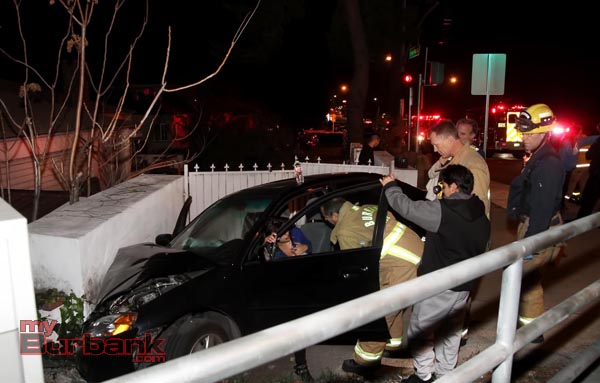 Burbank Police were only a block and half away arrived on scene within seconds. Burbank Paramedics responded and treated both patients, who complained of pain from seat-belts and were transported to a local hospital to be checked out.

The intersection has been redesigned several times, with safety features in mind and guardrails installed along with raised concrete dividers. When drivers proceed eastbound on Vanowen and come to the ‘T’ intersection at Buena Vista, they have to make a decision to go right or left. Drivers who can’t make the turn end up where the safety barrier is installed in the driveway.

Damage to the car was extensive, and the complaints to the City Council will again be heard from the occupant of the house who was not involved but required paramedics to return after they left for a complaint of a breathing problem. 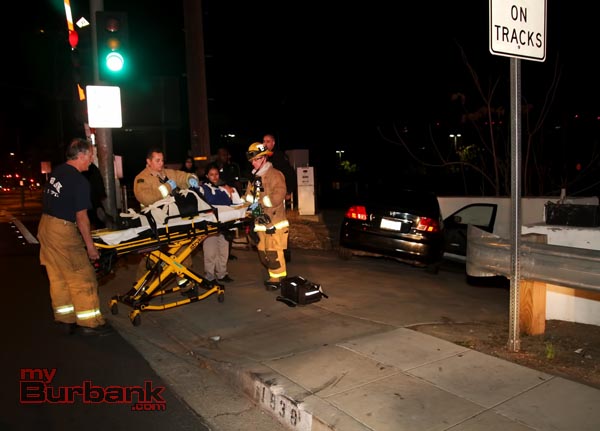