Burbank’s Water and Power opened it’s doors on Saturday for a dedication of their new EcoCampus. 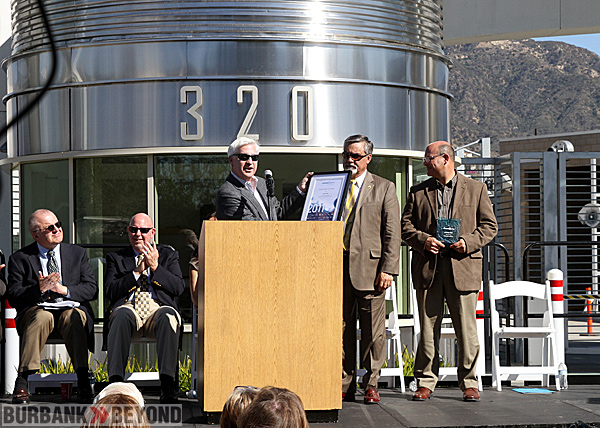 There were displays, tours, giveaways, food trucks and a ceremony on what was called The Green Street Center Stage, where Sarah Backhouse from Discovery Planet Green’s Plant 100 was Master of ceremonies.

Burbank Water & Power General Manager Ron Davis was joined by Burbank Mayor Jess Talamantes, City Manager Mike Flad, and executives from the MWD (Metropolitan Water District) and the U.S. Department of Energy. Burbank received an award for being one of the cities that conserved a large amount of water.

Tours were given of the new Eco Friendly Campus that is 100 % sustainable, the only fresh water that is used is for the drinking fountains and every other drop of water is captured in several ways and reused. The plant is one of the only California Leed Platinum Warehouse and Service Centers.

Gardens on the campus are not only on ground level but now on the roofs to keep the building cooler and the rain water that is collected is recycled for other use. The money for the complete project came from grants and from The Department of Energy, and other sources and no local funds were used.