The Los Angeles Chapter of the Eddie Gaedel Society and the Baseball Reliquary will host the “Eddie Gaedel Day” festivities this Friday, August 19, beginning at 7:00 p.m., at Timmy Nolan’s Tavern & Grill in Toluca Lake, California. 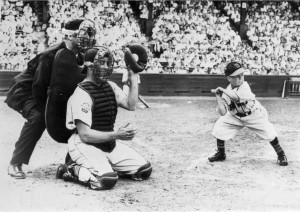 Friday will mark the 65th anniversary of Gaedel’s historic pinch-hitting appearance for the St. Louis Browns.  The complete details can be found on this link to the Baseball Reliquary Web site:

In addition to raffle prizes and the $2 Eddie Gaedel trivia contest, Ryan Steven Green, director of the new documentary film “The Hollywood Shorties,” will make an appearance with several of the Shorties.

The Hollywood Shorties professional baseball and basketball teams played a significant role in the history of organized sports in the American dwarf community. In 1949, legendary dwarf entertainer and character actor Billy Barty, along with Jerry Maren (who played a Munchkin in “The Wizard of Oz”), started the Hollywood Shorties baseball team, comprised entirely of little people, many of whom worked in the entertainment industry.

The Shorties played baseball and softball exhibitions into the 1980s. The Shorties basketball team achieved even greater notoriety, mixing comedy and athletic prowess into a show that resembled those put on by the Harlem Globetrotters. During the 1980s, they occasionally played against Laker cheerleaders during halftime of games at the Fabulous Forum.