It was so hot at the Elks’ Chili Cook-Off and Car Show on Saturday, organizer John Coyle joked that competitors didn’t need their portable stoves.

It was 104 degrees in the parking lot where entrants were simmering their recipes, according to Coyle, who is the leading knight of Burbank Elks Lodge #1497. Many of the 100 people attending — family and friends of the Elks — stayed in the air-conditioned lodge. 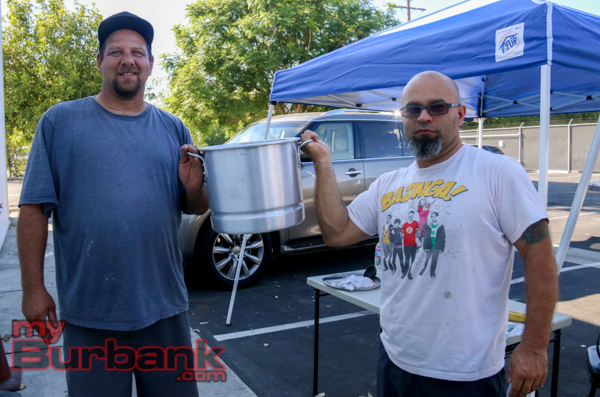 First-place winner was Elks member Mark Peale, who made his tasty blend following the rules of the International Chili Society — all meat, no beans or pasta.

A consolation first-place prize went to Road Kings car club members Karl Grossman and Don Baldaseroni who made two kinds of chili — one without beans and one with beans that took second place. Fellow Road King Al Gonzalez Jr., owner of Al’s Wholesale Meat, provided 30 pounds of meat and it was gone by the end of the event.

Grossman was the head chef and they used his recipe that was refined while he was a firefighter with the Los Angeles Fire Department. He’s now retired.

When tasters were judging the recipes, Coyle said, they preferred Peale’s meatless over Baldaseroni’s but they liked it and liked it even more with the beans.

“Unfortunately, this year’s turnout for the actual cooking of the chili was fairly scarce,” Coyle said. “I attribute this to the 104-degree temperature of the day. I guess there is a lot to be learned from the old adage: ‘If you can’t stand the heat, stay out of the kitchen!’ I would add though, that the chili that was prepared was excellent. Thanks to all who participated in this event.”

In addition to the chili, there were 30 classic cars displayed, about 20 of them owned by Road Kings members. Also displayed were a vintage 1952 Ford police car from the Burbank Police and Fire Museum, and a 1951 fire engine owned by George Moore of Van Nuys. Moore was a volunteer firefighter in Pennsylvania before moving to California. He purchased the fire engine at a truck show while visiting Pennsylvania in 1996. Moore is retired after a 30-year career with the Los Angeles Police Department.

​The Burbank Elks Lodge #1497 is a fraternal order dedicated to the act of charity. As an order, the Elks champion the plight of blind children through its donations.

“Not only do we see to the needs of these children, but we fund research in the field of child blindness,” Coyle said.

​The California-Hawaii Elks Major Project Inc. is a multi-million dollar-a-year charity that is funded solely by the charitable donations of its Elk members. Proceeds are raised through fund- raising events put on by Elk Lodges, such as the Burbank Elks’ Chili Cook Off and Car Show.

​Funds are actually collected daily at the lodge when members deposit their pocket change into conveniently located purple pigs. In all, the California-Hawaii Elks Major Project is providing therapy for some 400 children. More than a 100 pre-schoolers are visited by pediatric screeners, and nearly 50,000 children are screened for vision issues each year, including children in Burbank.

​In addition, the Burbank Elks is a sponsor of Burbank Boy Scout Troop 210. The Elks maintain a close relationship with these young men working together on community projects, Coyle said.

The Road Kings will have their annual Car Show at Santa Anita Horse Race Park beginning at 7 a.m. on Oct. 11. All proceeds go to Burbank and San Fernando Valley charities. For registration and other information, visit roadkingsburbank.com.

The Road Kings car club of Burbank began in 1952 and some of the famous members include drag racers Don Prudhomme, Tommy Ivo and Ken Safford. Many Road Kings members still race today, including Bob Muravez, who recently began driving the Western Hoist top fuel dragster in the Nostalgia Races. In his third race, Muravez won at Las Vegas.