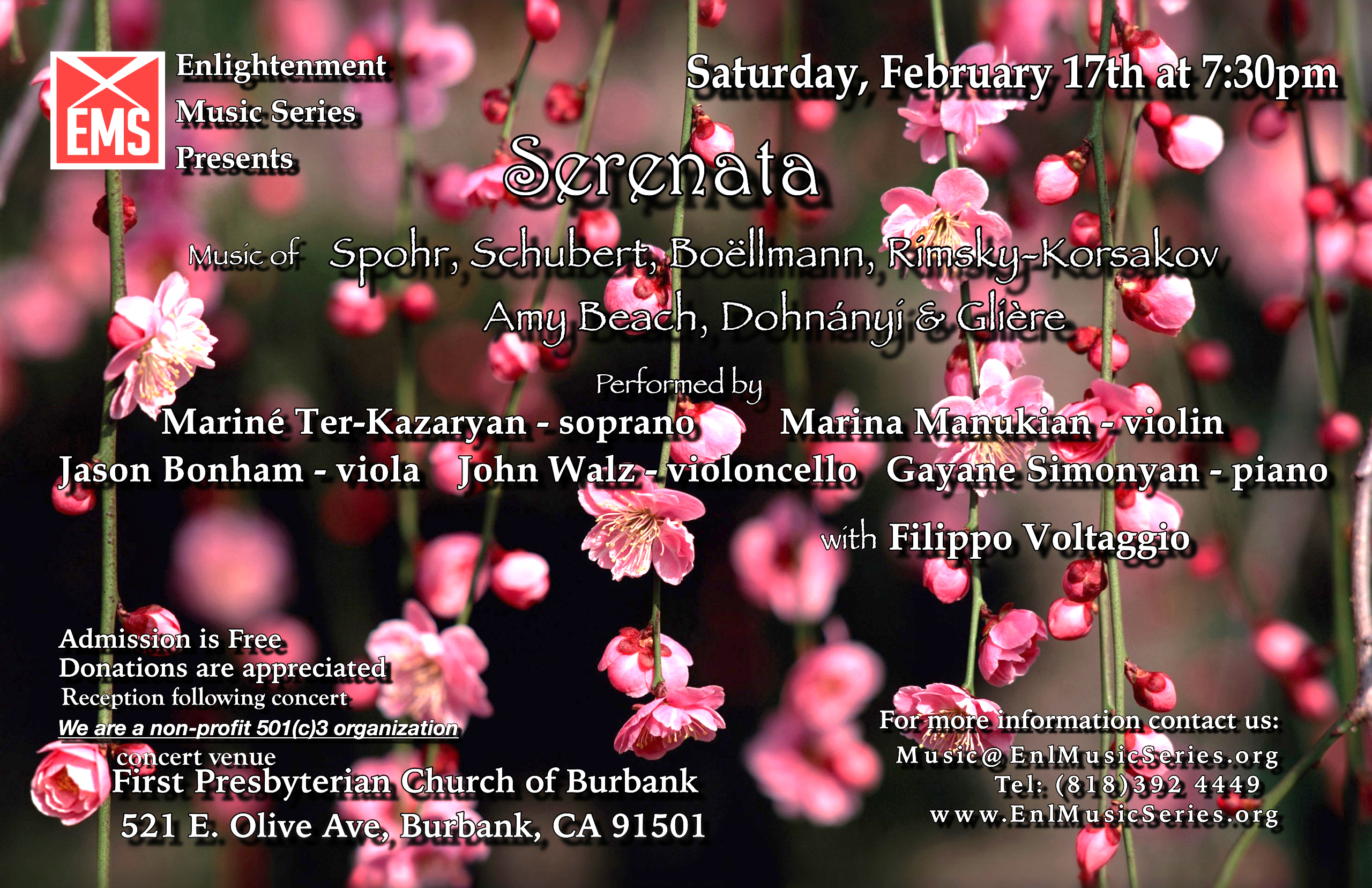 Featuring professional classical musicians from Los Angeles and Las Vegas, the Serenata program begins with works for violin and piano by composers Reinhold Glière and Amy Beach. Compositions for violin and viola by Ludwig Spohr and for cello and piano by Lëon Boelmann will also be performed.

Franz Schubert’s Nocturne for piano, violin and violoncello, played by Gayane Simonyan (piano), Marina Manukian (violin) and cellist John Walz will close out the first half of the program.

After a brief intermission, several works by Nikolai Rimsky-Korsakov will be performed by soprano Marinè Ter-Kazaryan accompanied by Simonyan on the piano.

The Serenata concludes with a Serenade for violin, viola and violoncello by Erno Dohnányi performed by Manukian (violin), Jason Bonham (viola) and Walz (cello.)

Walz has been principal cellist of the Los Angeles Opera orchestra for many years. Bonham is currently principal violist of the Las Vegas Philharmonic. Ter-Kazaryan and Simonyan are both faculty members of Glendale Community College.

Master of ceremonies Filippo Voltaggio, who is also host of talk radio The Life Changes Show, will talk with the audience about chamber music repertoire.

“For over a decade, our Enlightenment Music Series has been  inspiring our audiences to discover the magic of classical music,” commented Series founder and artistic director Manukian. “Our mission is to encourage all audiences to make classical music as part of their lives. ‘Music is the medicine for the soul!'”

Enlightenment Music Series has presented over 70 concerts since its inception in 2006, at a variety of venues and for many fundraising causes including the Red Cross, Japan Earthquake Relief, American Liver Foundation and City of Hope.

“For our twelfth concert season, the series will make its new home in Burbank,” added Manukian. “We look very much forward to being the first chamber music series in this neighborhood and continuing performing fine live classical music concerts for even larger audiences.”

A reception will immediately follow the concert. Serenata begins at 7:30 p.m. on Saturday. Admission is free but donations are appreciated.

Future concerts in the series will be held at First Presbyterian on March 17, April 21 and May 19.