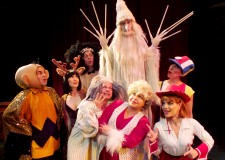 A few nights ago I went to see the annual holiday show at the Falcon Theatre. This year’s show was “Walkin’ in a Winter One-Hit Wonderland.”

The Troubadour Theater Company, made up of actors, musicians and comedians has performed annual holiday shows at the Falcon Theatre for over 10 years.

To me, there is nothing that says Christmas more than the Falcon Theatre. The Troubies always put on an excellent and captivating show. They are known for their witty dialogue, which masterfully incorporates current events, as well as their notorious use of breaking the fourth wall. The storylines are always clever, and often feature cameos by characters from past shows.

The Falcon Theatre holiday shows always incorporate a certain singer or band into their holiday storyline.

This year, instead of focusing on the hits by one artist, the Troubies decided to use famous “one-hit wonders” as the featured music in the show. Selected songs from this year’s show included “Somebody That I Used To Know,” “I’m Too Sexy” and “Take On Me.”

This year’s show seemed to be even more amusing than past years. The actors were quite artful, performing jokes and adlibs with impeccable timing. Active audience participation, including dressing an audience member up in a Santa suit, made the show engaging and hilarious.

My family and I have gone to the Falcon Theatre’s holiday show for over five years now. The comedy is sharp and the music is captivating. Our holiday tradition would not be complete without the Troubies.

Make the Troubies part of your holiday tradition. “Walkin’ in a Winter One-Hit Wonderland” runs through Jan 19, 2014 .

Visit http://www.falcontheatre.com/winter_one_hit_wonderland.html for more information and to purchase tickets.