The Falcon Theatre is proud to present the second production of its 2016-2017 Season, Buyer & Cellar, written by Jonathan Tolins, directed by Dimitri Toscas, and starring Broadway and TV personality Jai Rodriguez.  Performances run Oct. 5 – Nov. 6 at the Falcon Theatre.  Tickets on sale starting Sep. 7 at www.falcontheatre.com or 818-955-8101. 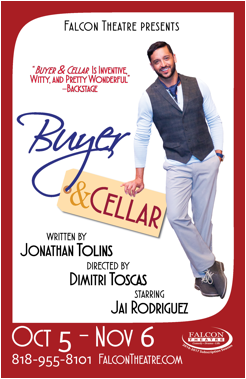 Inspired by Barbra Streisand’s book My Passion for Design, this Off-Broadway hit is an outrageous comedy about the price of fame, the cost of things, and the oddest of odd jobs.  Alex More, a struggling actor in LA, takes a job working in Barbra Streisand’s Malibu basement, as a solo shopkeeper of sorts for her mall-like collection of memorabilia.  One day, the Lady Herself comes downstairs to play, and an unlikely friendship develops.

This one-man-play takes the audience on a rollercoaster of emotions as Alex navigates a world that is part truth and part fiction.  What is true?  There is a galleria in the basement of Barbra Streisand’s Malibu home.  Tolins takes this truth and creates a hilarious world where one man services the whole mall for a single customer, Babs herself.

“Spectacular. Beyond Brilliant. This show will go down like butta’!” –Entertainment Weekly

Jonathan Tolins (Author) is the author of Buyer & Cellar, which was named “Best Unique Theatrical Experience” by the Off-Broadway Alliance when it premiered at Rattlestick Playwrights Theater.  Other plays include The Twilight Of The Golds (Broadway, Booth Theatre), If Memory Serves (Promenade), The Last Sunday In June (Rattlestick, Century Center), and Secrets Of The Trade (Primary Stages).  A collection of his plays has been published by Grove/Atlantic.  His film work includes The Twilight of the Golds and Martian Child.  For television, he was a writer for Queer as Folk, the Academy Awards, the Tony Awards, and Partners.  He was the author of Pushkin 200: A Celebration at Carnegie Hall, acted as script consultant on Walking with Dinosaurs: The Arena Spectacular, and co-wrote The Divine Millennium Tour and The Showgirl Must Go On for Bette Midler.  He has written articles for Opera News, Opera Monthly, TheaterWeek, Time Magazine, and the Huffington Post, and is a panelist on the Metropolitan Opera Radio Quiz.  He lives in Fairfield, Connecticut with his husband, the writer and director Robert Cary, and their children, Selina and Henry.  He is a member of the Dramatists Guild and the Writers Guild of America.

Jai Rodriguez (Alex More) Emmy Award-winning television host and Broadway singer/performer Jai Rodriguez began his career at age 18 when he was cast in the role of Angel in the critically acclaimed Broadway musical Rent.  Jai continued his Broadway career, staring in shows like The Producers and Spinning Into Butter, and he created and performed the title role of ‘Zanna’ in the Off-Broadway sensation Zanna, Don’t!.  Most recognized for his role in Bravo’s culturally groundbreaking series Queer Eye For The Straight Guy, Jai created a niche role on the Emmy Award-winning series as the ‘Culture Vulture,’ a youthfully savvy addition to the show’s already dynamic cast.  In the past few years Jai returned to TV in dramatic roles on ABC’s Detroit 187, guest star appearances on NBC’s Are You There Chelsea?, FOX’s Bones, and as transgender woman ‘Amanda Knott’ on NBC’s Harry’s Law.  Jai stared as ‘Geoffrey’ on ABC’s comedy Malibu Country opposite Reba McEntire and Lily Tomlin, making him the first male to garner fame from a reality series to become a series regular on Network TV.  This past Christmas Jai stared opposite Kelly Clarkson in her NBC Christmas Special, Kelly Clarkson’s Cautionary Christmas Tale.  Currently Jai can be seen opposite Martin Sheen and Sam Waterston in Netflix hit series Grace and Frankie, as ‘Sax’ on the Bold And The Beautiful, as well as the official host of Lifetime’s Dance Moms reunion and Girl Talk specials.