Just when you thought you were done with all of the election bombardment, get ready another round beginning in early 2017 as residents will vote for new officials in the City of Burbank with the All Mail Ballot for the Burbank Primary Election to be held on February 28, 2017 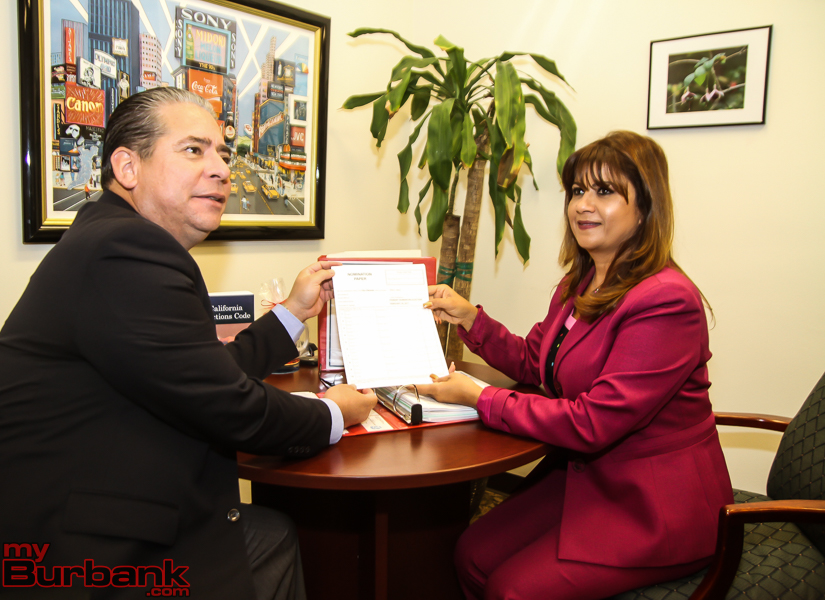 Councilman Bob Frutos, who will run to retain his seat, is shown with City Clerk Zizette Mullins with his nominating papers (Photo by © Ross A. Benson)

Council members Bob Frutos, Dr. David Gordon and Mayor Jess Talamantes seats are going to be open with all three of the incumbents seeking to return to the council.   Richard Carr, Sharon Springer, Juan Guillen, Konstantine Anthony, and Gregory R. Sousa have also qualified for the ballot according to City Clerk Zizette Mullins.

In the Burbank Board of Education race, both member Charlene Tabet and President Larry Applebaum are up for re-election and both have filed their papers to run again. Newcomer Steve Frinter will be the third candidate vying for the two open school board seats.

City Treasurer Debbie Kukta and City Clerk Zizette Mullins have also decided to run for re-election and both will run unopposed.

Any candidate who receives 50% plus one vote in the primary will be elected and the remaining seats candidates will face off in the General Election on April 11, 2017 in another All Mail Ballot Election.