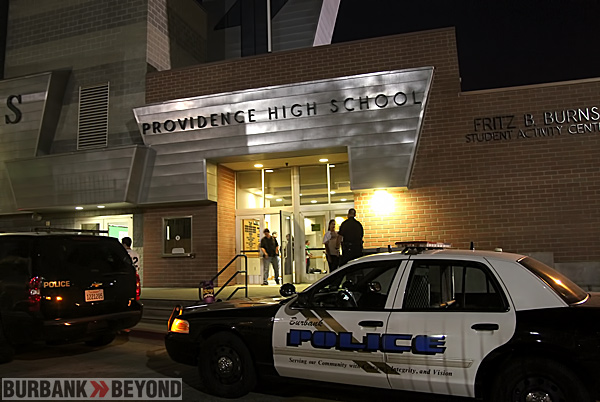 Burbank Police dispatched several officers to Providence High School after a fight broke out at a Volleyball game between Bellarmine-Jefferson High and St. Monica Catholic High School, sending one player to the hospital. (Photo by Ross A. Benson)

Update: After an investigation by the Burbank Police Department’s Juvenile Bureau, it has been determined that the injured volleyball player from St. Monica Catholic High School,  had jumped on the back of a Bellarmine-Jefferson player at the end of the game.  The taller Bell-Jeff player, in an effort to defend himself, flipped the other player off his back.   The St. Monica player may have susptained a fractured collarbone in the incident.   The investigation has ended.

A volleyball game between Bellarmine-Jefferson High School and St. Monica Catholic High School ended with a pushing and shoving match  that  sent one student to the hospital Saturday afternoon.

The game between Bell-Jeff ‘s boys’ varsity volleyball team and the team from St. Monica, which is located in Santa Monica, was being played in the gymnasium at Providence High School, as part of the Providence Volleyball Tournament.  According to police, two players began fighting when another student from Bell-Jeff intervened and grabbed a St. Monica’s player around the neck and pulled him off the other player.

Burbank Fire Department paramedics were dispatched on a first-aid call for an assault victim around 5:15 p.m. Saturday at the gym, which is located on the Providence High campus on S. Buena Vista St. Burbank Police eventually were called, and responded with several officers and a sergeant.   The injured St. Monica player was transported by ambulance the short distance to Providence St. Joseph Medical Center for a possible fractured collarbone.

Police interviewed witnesses, and the case will be turned over to the department’s Juvenile Bureau for investigation.