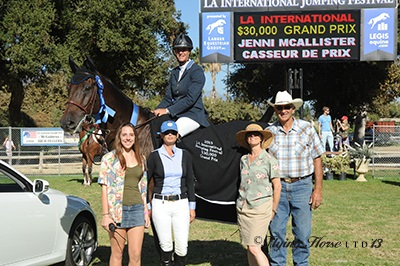 Langer Equestrian Group (LEG) hosted the final Los Angeles International Jumping Festival at the L.A. Equestrian Center in the Rancho district of Burbank from September 18-22. After 30 years at the Equestrian Center, LEG will partner with Blenheim EquiSports and combine the Blenheim Fall Tournament with the LA International Jumping Festival for two weeks of top level horse showing, and debut the new show at Rancho Mission Viejo Riding Park in San Juan Capistrano next year.

Jenni McAllister and her mount Casseur de Prix (owned by Granville Equine) won the big prize of $9,000 after a down-to-the-wire jump off. Going into the final round of jumps, several riders and horses had a chance at winning it all, but Ms. McAllister and Casseur de Prix squeaked by with a narrow margin to clinch the victory and first place prize worth 30 percent of the total $30,000 Grand Prix purse.

The National Preview Horse Show will be held on October 30 through November 3 with the Los Angeles Hunter Jumper Association (LAHJA) LA Saddlery Junior and Senior Medal Finals, plus the LAHJA Pony Medal Finals, the West Coast Pony Hunter and Jumper Finals (which is the first part of Pony Palooza), $12,000 West Coast Children’s-Adult Amateur Jumper Championship and the $41,000 LEG Anniversary Grand Prix. Costumed riders (and horses) will compete in the $10,000 Spooktacular Open Welcome Stake and the $1,000 Howling Fun Tandem Hunters, with special prizes for costumes throughout the day and a special dog costume contest sponsored by LEGIS.