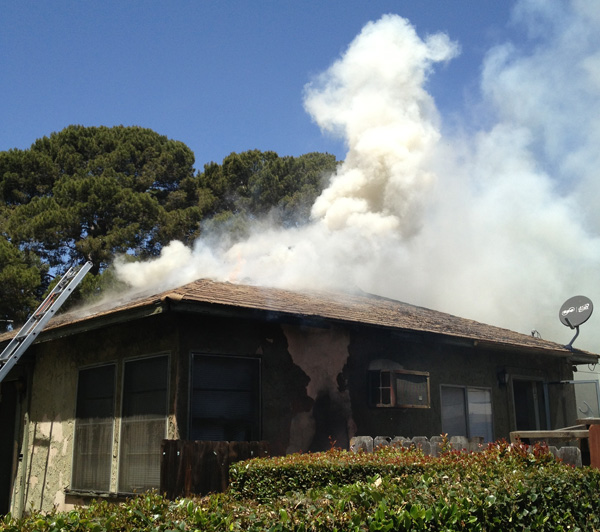 Burbank Firefighters received a call of a possible house fire at 2013 Monterey Ave. at 11:50 am.

Upon arrival, Burbank’s Truck 11 reported that there was heavy smoke coming from the structure and proceeded to start ventilation to open the roof.  The first-in engine company started fire attack and had the fire knocked down inside the residence within about 15 minutes.

Salvage was then stared to help protect the resident’s belongings from smoke and water damage.  No one was home at the time and it was reported that the residents were at work at the time of the fire.  The house is located on Monterey between Keystone and Lamer and is only about a block from Monterey High School.  There was no threat at any time to the students or school.

An Alert gardener, Sergio Lopez, who was mowing a lawn down the street heard something strange and looked up to see flames on the side of the house.  He ran next door and alerted the resident who called the fire department, as neighbors grabbed garden hoses and started getting water on the flames before the fire department arrived.

At the start of the incident, Paramedics treated a nearby resident who reportedly had difficulty breathing and a Burbank Fire Captain had a small, minor laceration to the face.