The spring sports season was a memorable one for Burroughs High. The boys’ volleyball team reached the CIF Southern Section Division 2 final. The softball team went to the Division 3 semifinals. The baseball team earned a share of the Pacific League crown and pole vaulter Sarah Prystupa reached the state meet in track and field.

Thus it comes as no surprise that Burroughs was well represented in postseason awards.

“It’s just an incredible achievement to get three guys on the All-CIF team and all three of them deserve it for their excellent play throughout all of the CIF playoffs,” Burroughs volleyball coach Joel Brinton said. “They continually led us each and every night.” 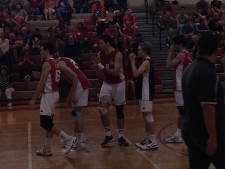 D’Almada, who earned All-CIF honors for a second straight season, thanked his teammates for helping him.

“I wouldn’t have been able to get it without everyone on the team,” D’Almada said. “:This season has been an amazing experience. The hard work every single one of these guys put in from August up until May 28 during the state championship (was amazing).”

In softball, sophomore pitcher Presley Miraglia was selected to the All-CIF team.

“I think he deserves to be on the first team,” Burroughs coach Craig Sherwood said. “He had a tremendous year. I’m happy for him and I’m proud of him.”

Van Loo, a 6-foot-3 setter who is headed on a scholarship to Lewis University, was named to the All-CIF team for a second straight year.

D’Almada, a 6-5 outside hitter, also was named to the All-CIF team for a second straight season.

The trio helped Burroughs put together a 31-6 record, losing in the CIF title match to Oak Park. The Indians redeemed themselves in the Southern California state playoffs by defeating Oak Park in a rematch.

Miraglia posted a 20-4 record in leading the Indians to the semifinals before losing to eventual champion Grand Terrace High.

“She’s a great player,” Burroughs coach Doug Nicol said. “I think she’s on pace to be one of the best athletes ever to come out of Burroughs. She’s one of the best pitchers in Southern California and we’re lucky to have her.”

Nicol, who signed with Cal State Northridge, posted a 7-2 record in 56 2/3 innings. He had 66 strikeouts and just 14 walks, posting a 1.48 ERA in leading the Indians to a share of the Pacific League crown.

His biggest game was arguably in the final of the Easton Tournament, when he pitched a two-hit shutout and struck out 14 Harvard-Westlake batters in helping his team to a 1-0 victory.