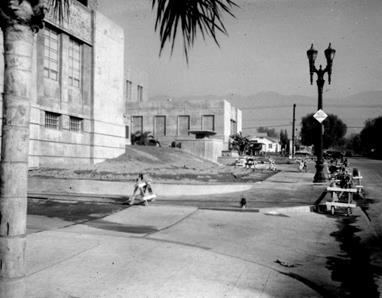 The Current  City Hall at 275 East Olive has been in service to the public since the early 1940’s. I have had the privilege of working in this fantastic structure for nearly 30 years. I have come to love this building for it superior design and the beauty of the entire structure inside and out.

Did you know that from the top of the tower to the basement floor it is one solid piece of poured concrete! The art from the paintings to the sculptures and the reliefs on the outside is the finest money could buy in its time.

Movies have been filmed inside and out. TV programs are awash With city hall images. Famous people have spoken here to huge Crowds including Richard Nixon and George S. Patton!

City Hall is a truly unique place in our City and I encourage you to get to know this building and the great history it has and learn why it has been placed on the “NATIONAL REGISTER OF HISTORIC PLACES” by the U.S. Department of the Interior.

If you only get into the lobby you will be amazed at the fine artwork from the floor to the walls and the Ceiling. It is truly a beautiful structure. To learn more click on this link http://wesclark.com/burbank/city_hall.html also check out the photo section on BURBANKIA and scroll down to “CITY HALL” http://wesclark.com/burbank/photos.html to see more images of City Hall from the past.