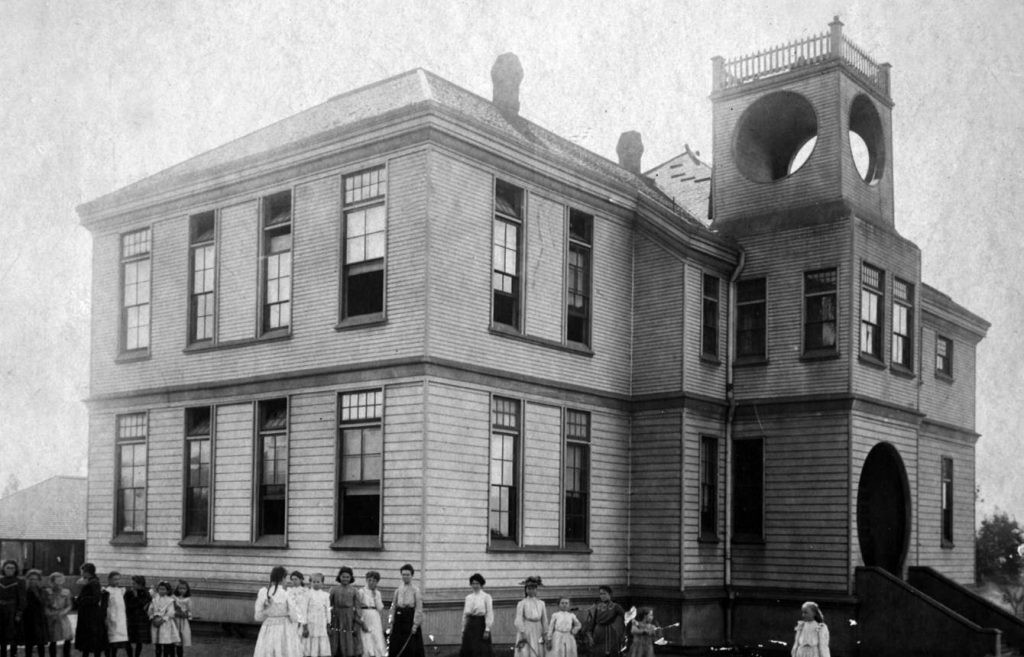 The first school district in Burbank was established on June 3, 1879, upon petition of Mr. S. W. White and nine other citizens. It was known as Providencia School District.  It was located on Burbank Boulevard, close to what is now Mariposa Street. Dr. David Burbank gave one acre of land for this school. 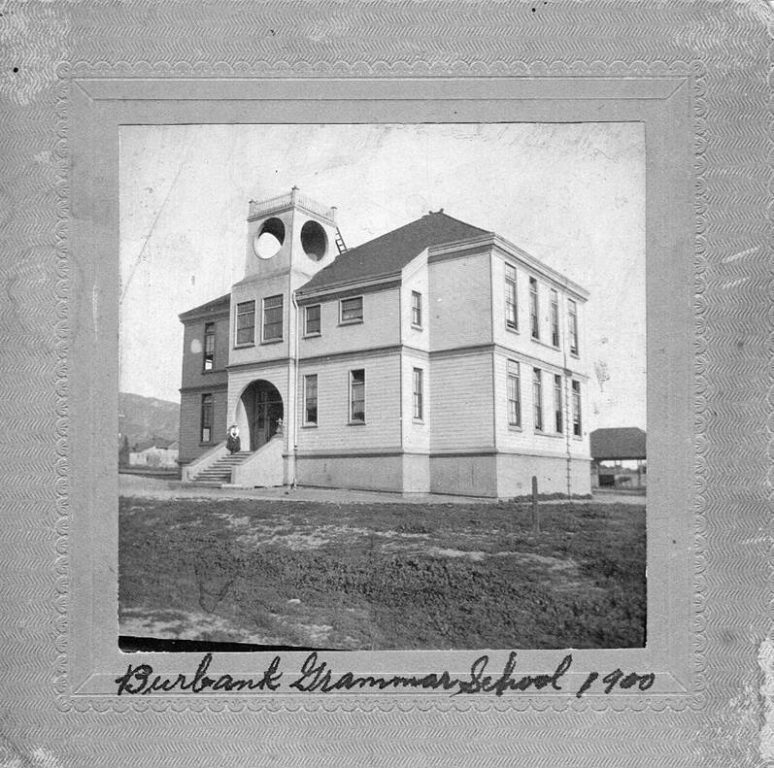 At that time, there were nine families in the area who sent children to the school. The school was used until about 1887 when it was abandoned because the classes moved to a new grammar school on Magnolia Boulevard and San Fernando Road. The new building faced Magnolia.

This was the City of Burbank’s first real official school building, the old one being more of a house than a dedicated school.

The new grammar school was a two-story frame building with four classrooms upstairs and four downstairs. It had a belfry or bell tower which housed the bell that called the boys and girls of the community to school each morning.

The bell was tolled by means of a long rope, which extended down from the tower, through the building, to within reach of the principal at a point right near the front door. 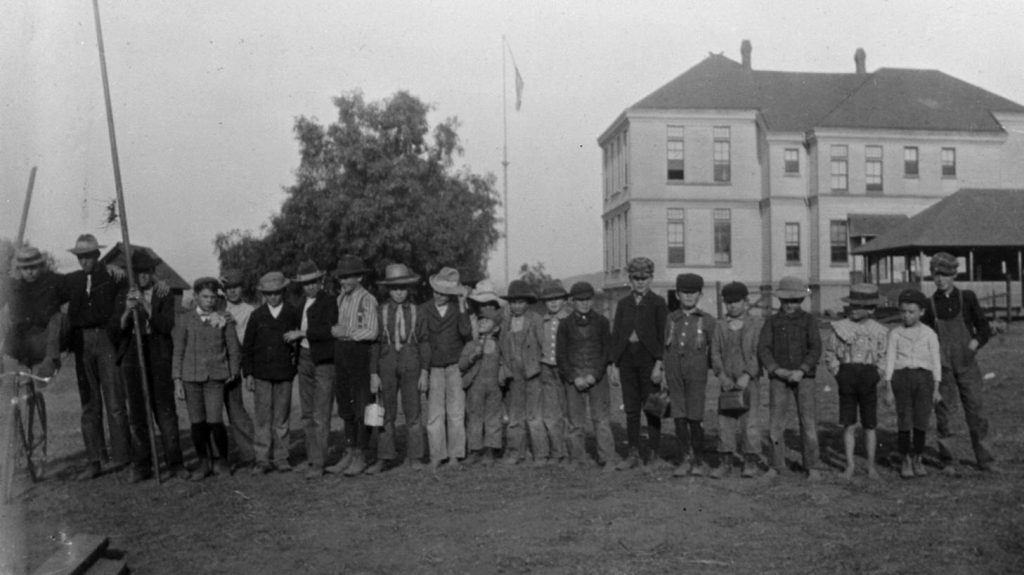 Lunch Shed can be seen in back of school

At the rear of the school was a windmill and an elevated tank which stored the water pumped from the ground. The space below the water tank was framed in, and it was here that many of the boys and girls kept their bicycles.

Near the present corner of Third Street and Palm Avenue there was a lean-to carriage shed in which the youngsters kept their horses and buggies and their ponies and pony carts while they were in school.

Children came to the Burbank Grammar School from as far away as the area of Brand’s Castle in Glendale, Roscoe (now Sun Valley), and the present Warner Brothers area at the south end of town.

The school playground was the area now occupied by store buildings along the San Fernando Boulevard frontage between Magnolia Boulevard and Palm Avenue. 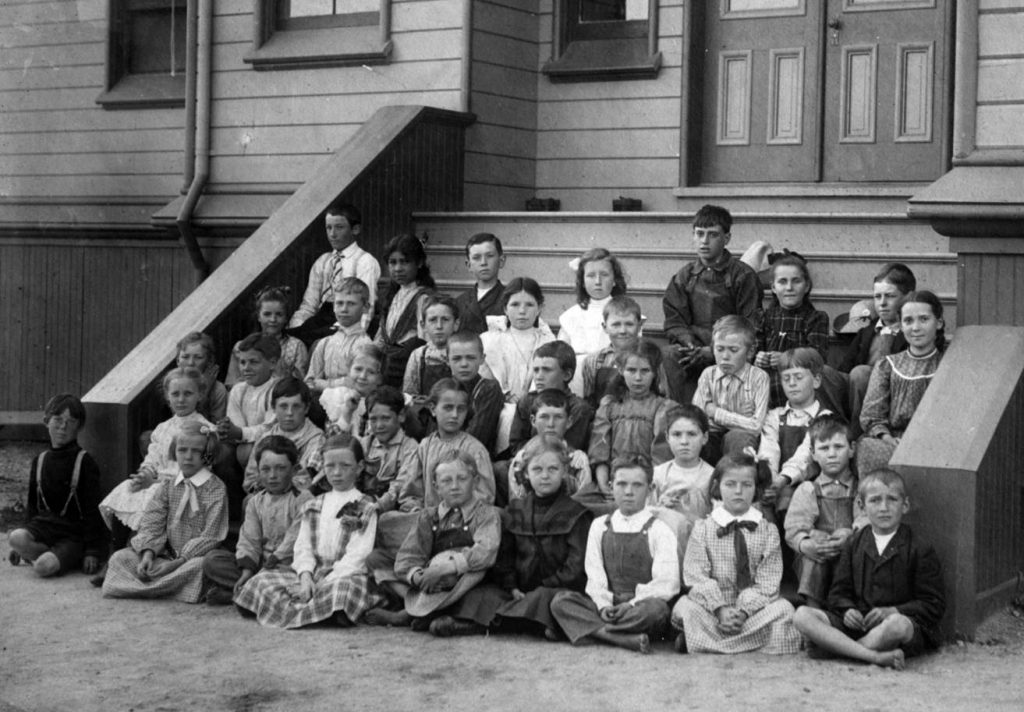 During some of the time that the Burbank Grammar School was used, the children maintained a flower garden in the area in front of the school and a vegetable garden near the shed which was used to house the horses and buggies. The care of those gardens provided practical experience for the boys and girls studying agriculture, one of the main occupations of the area at that time.

There were two lunch houses at the rear of the school, one for boys and one for girls. Each child brought in his own drinking cup (No juice boxes here!) which hung in the lunch house and, of course, the children all brought their own lunches with them each day. ( no Oscar Mayer  Bologna either!)

Games were played at recess time in the schoolyard. These included darebase, pomp-pomp-pull-away and hide and seek. 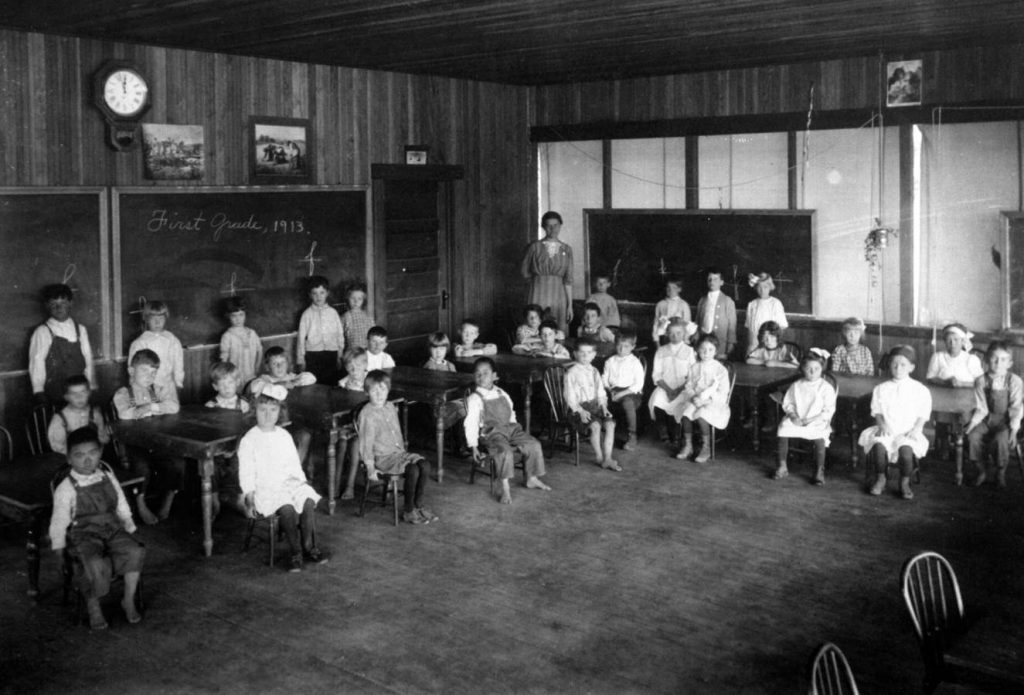 To enter school each morning the boys and girls lined up in separate lines at the front steps and marched into the building in time with the sound of a drum, beat by a selected pupil. (I guess he was called the Drum Monitor)

When the school first opened, there were four teachers and a principal, and the student body totaled about 200 children. The school had classes for grades one through eight.

It is hard to imagine going to school like this in modern times but we have a good number of pictures to give us an idea. I like how the kids in the photos are so serious. It was a hard life back in those days. 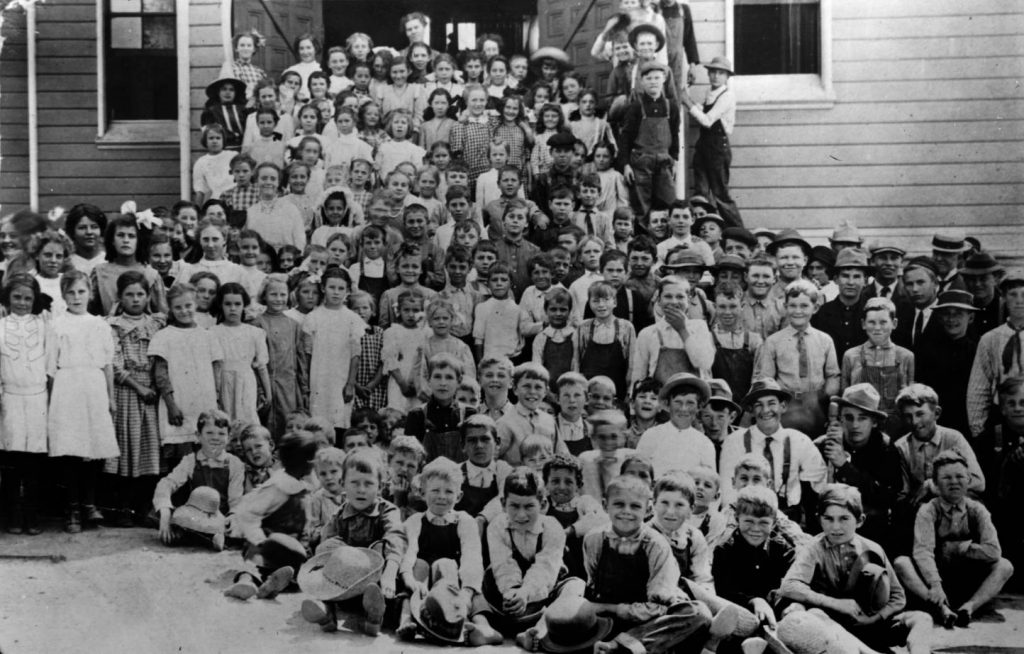 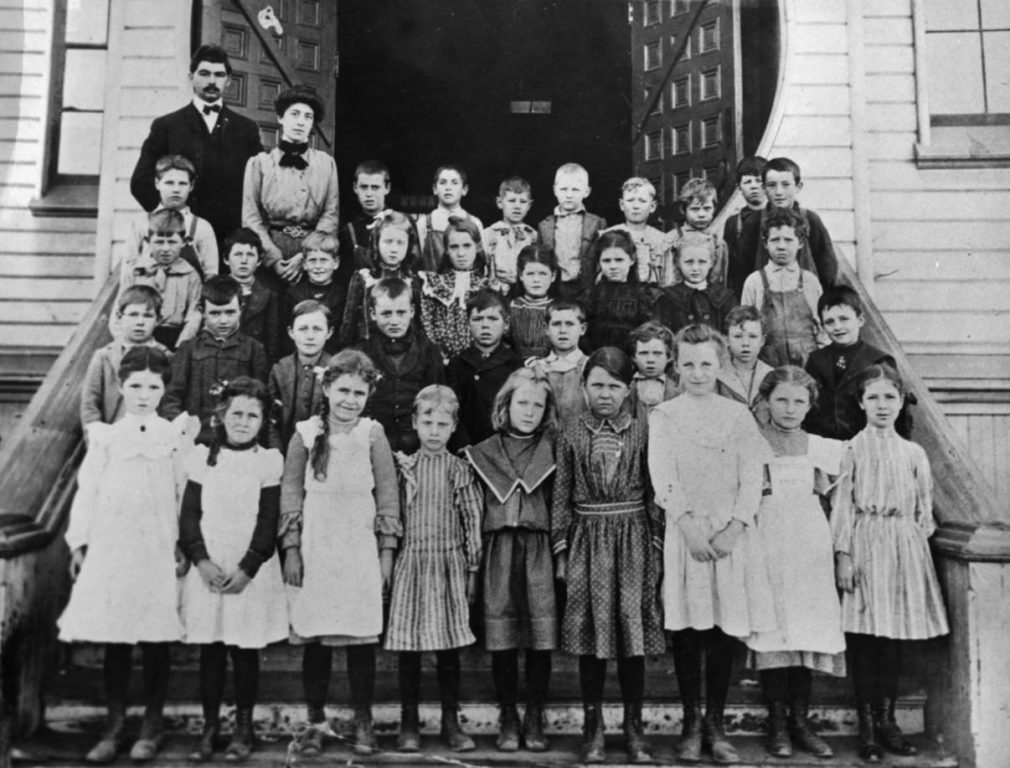 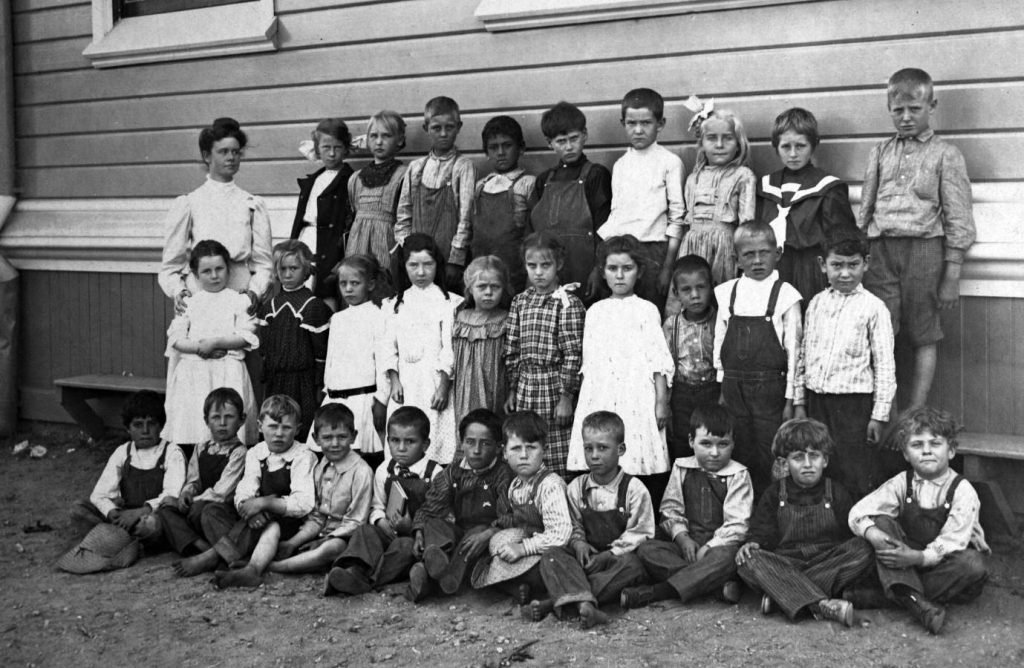 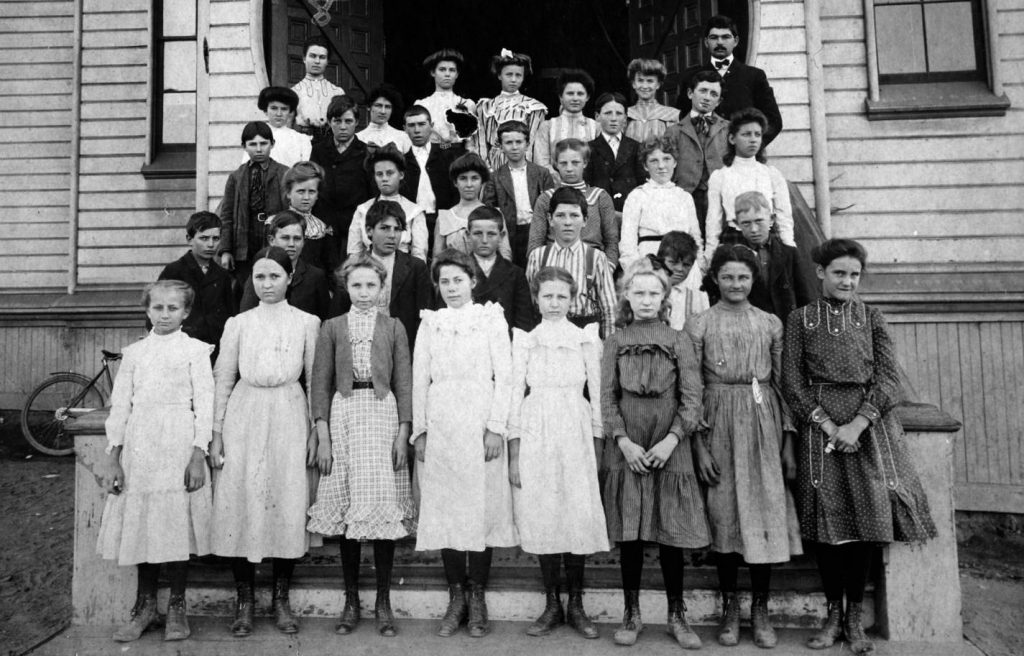