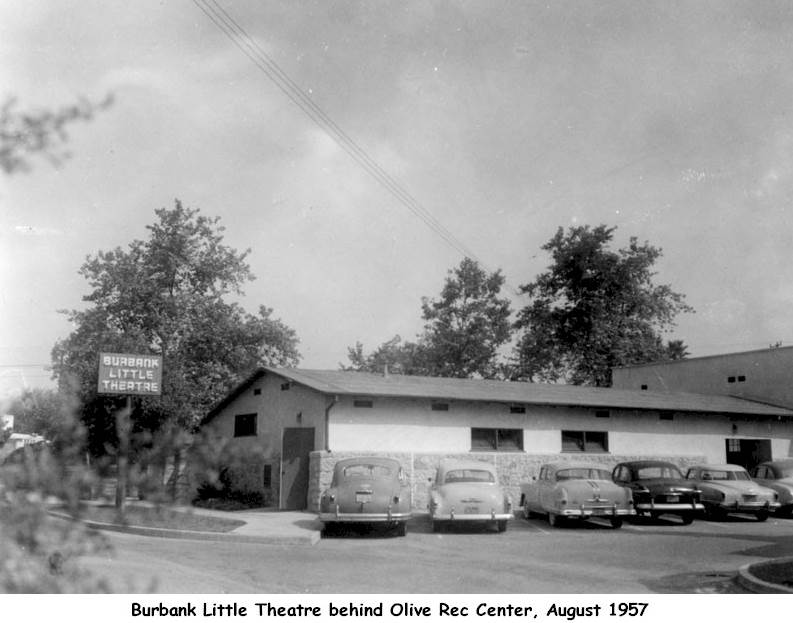 Behind the main building of The Olive Recreation Center stands a small building that once had some of the best local theatre performances in the area.

This was the hot spot of local live theatre. Built just after World War Two the theater became a great place for local productions on weekend evenings and Saturday matinee performances.

Many actors got a start there, or performed there to the delight of the audiences to see such Hollywood talent up close. Many local programs were also done there, bands, dance competitions comedies and the like!

Pictured below is one such play were actress Jean Howard, Ron Howard’s Mother and Gordon Jump who would go on to act in the TV Series WKRP in Cincinnati and became the “Maytag Repairman” in those famous old commercials.

So the Burbank Little Theatre was the place to be in town to see quality entertainment and enjoy and evening out at the theater.

While the theatre is physically still there, they no longer use it as an entertainment facility sad to say.

Maybe one day Park and Recreation will see fit to re-open this little gem of Burbank’s past.

News Devin Herenda - September 24, 2021 0
Kenny Loggins discusses his career as a singer-songwriter and his upcoming performance this Sunday in Burbank.