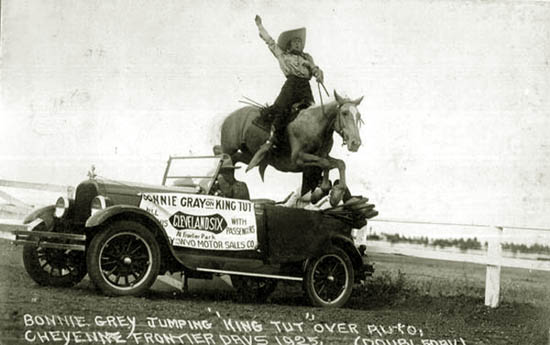 Recently the Burbank Unified School District made a decision to rename David Starr Jordan Middle School because of an issue of character with Mr. Jordan whom the school is named after.

The District has formed a committee to study the issue and come up with a new name.

You may be wondering what this has to do with Burbank History which we present each Friday here on myBurbank.com. Let me illuminate the historical facts about the land and its historical owner before the school district built the Middle School named Jordan, and present the only logical and historic name to be chosen!

Back in the early days of the City of Burbank there was a great lady named Bonnie Gray who owned the land the school now sits upon. I will quote from our recently released book entitled “TRUE TALES FROM BURBANK” by Wes Clark and Myself to give you an idea about this great resident of Burbank and why her name should grace the front of the school…

Burbank once numbered among its citizens an internationally recognized champion trick rider and rodeo star, Bonnie Jean Gray. Born Verna Grace Smith in Kettle Falls, Washington, in 1891, she graduated from the University of Idaho at Moscow with a degree in music (she later did postgraduate work at the University of Chicago).

While at the University of Idaho, she was the tri-state tennis champ. An accomplished pianist, Bonnie taught music for a short time. During World War I, she studied nursing at the U.S. Army’s Camp Lewis in Montana.

While the 1918 influenza pandemic raged, she nursed hundreds of Apache Indians as a Red Cross volunteer on the reservation at Fort Apache, Arizona.

Bonnie grew up around horses and took up rodeo and trick riding. She told her disapproving parents, “If one loves a thing and does it well, why shouldn’t she do it?” Tall and athletic in the saddle, astride her horse King Tut, her signature stunt in the 1920s and ’30s was to jump her horse over an open car containing passengers; she was also one of the first women to ride bulls in Mexican bullfights and, in 1922, was claimed to be the first woman to perform an “under the belly crawl” on a horse.

Her 1930 Los Angeles wedding to Burbanker and fellow trick rider DonaldHarris was unique, as it was held with all one hundred people in the wedding party mounted on horseback—even the minister.  Afterward, she and King Tut leapt a car in which her new husband and bridesmaid were seated.

Bonnie Gray was a star performer in the Elks Club rodeos held in the early 1930s on the Jeffries Ranch property on the corner of Victory Boulevard and Buena Vista Street. (James Jeffries was given a three-foot-diameter sombrero as a token of esteem for hosting the events.)

She also performed in Mexico, Canada, the United Kingdom and Germany.

Bonnie Gray’s later career included being a movie stuntwoman, doubling for such cowboy stars as Tim McCoy, Tom Mix, Hoot Gibson and Ken Maynard. She once earned $10,000 for a stunt involving jumping some brush and hurtling down a ten-foot cliff astride a horse; she fell backward, claiming afterward that she’d never do such a dangerous stunt again.

Bonnie Gray’s Burbank ranch was located where the David Starr Jordan Middle School is located now. In fact, if archaeologists ever dig up the playground, they’ll find the eight horses, two mules and  numerous dogs, cats and other pets she had buried there.

Gray died in Burbank in 1988, age ninety-seven. Her name and history are enshrined in the National Cowgirl Hall of Fame.

Many of her outfits and personal items are on display in the Gene Autry museum in Griffith Park near the zoo as Mr. Autry was a big fan of Burbank’s famous cowgirl!

Bonnie Gray embodies all of the best attributes that students at Jordan could ever hope to aspire to. She was a college grad, did post graduate work, accomplished pianist, became a nurse, volunteered with the Red Cross, Nursed hundreds of Native Americans during the Flu pandemic, became a world class equestrian rider performing worldwide, first woman to do many stunts only men had done before, developed her own signature stunt jumping.

In 1981 Gray was inducted into the National Cowgirl Hall of Fame.

Bonnie Gray was a smart well-educated brilliant woman who was also a Humanitarian, accomplished Musician, Champion Athlete, Performer, film industry stunt pioneer, lover of animals and the most logical person to name a middle school after to inspire and be an example to students of what they can accomplish with their lives. We whole-heartedly nominate Bonnie Jean Gray Middle School to be the new name of this fine learning institution for the youth of Burbank.