One of the Great Early Citizens of Burbank who is little known to Burbankers today is Miss Octavia Lesueur known as the “Grand Little Lady” of Burbank. 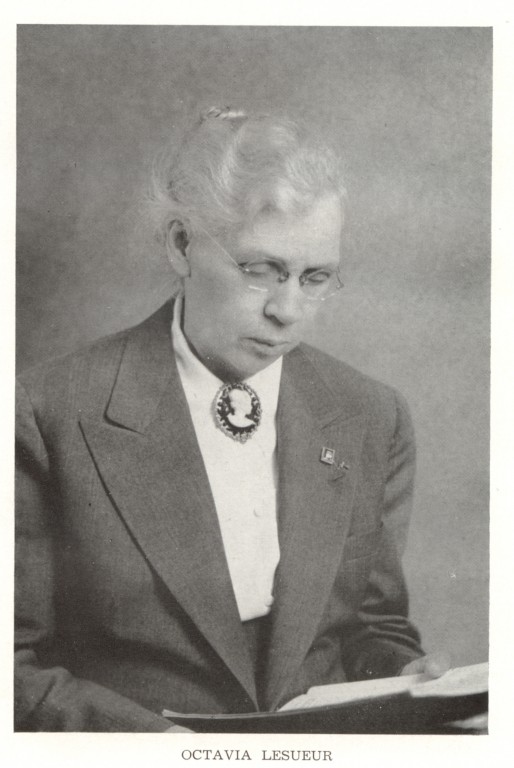 In a time when women were not involved in business and leadership roles within a community, Octavia was everywhere in Burbank.

Her many accomplishments are still with us today.

She was singled out to write most of the City Charter that is with only minor changes still in use today. She was the first Park and Rec leader and was responsible for the opening of the first Park in Burbank (Vickroy) and planted 30,000 trees along the streets of Burbank in her 8 years on the park Board. Many of which still line our streets.

She organized the local Realty Board and served as its president. She also helped found the St.  Jude Episcopal Church, The Burbank Women’s Club and the Burbank Zonta Club for Women Executives.

She also owned her own insurance company while doing all of the above mentioned services to the community.

So next time you are driving along a street in Burbank and see a large old tree remember It was placed there for you to enjoy by a lady named Octavia!

Get your Copy of Lost Burbank Now!
Slowly fading with the city’s ever-changing landscape, the places and people of Burbank’s past tell a vibrant story. Before the arrival of Warner Bros. and Walt Disney, First National Pictures built  its original studio lot on Olive Ave in 1926. For over sixty years, Lockheed Aircraft Company produced some of the nation’s best airplanes where the massive Empire Shopping Center now stands. Heavyweight champion James Jeffries turned his Burbank ranch home and barn into a beloved landmark and boxing venue. Inventor Joseph Wesley Fawkes’s scheme to build a monorail to Los Angeles became a local laughingstock.  Diehard Burbankers Wes Clark and Michael Mc Daniel collect these and many more forgotten local stories where they can finally be found.