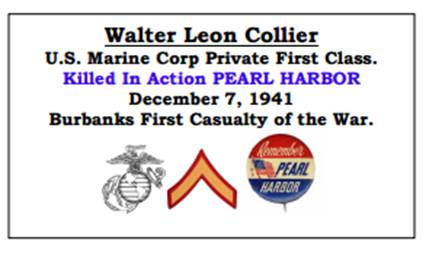 On this the 75th anniversary of the Attack on Pearl Harbor we would like to Honor Burbank’s first casualty of the War. Walter

Leon Collier was a Marine station aboard the USS Oklahoma when it was attacked on December 7th, 1941. He had been stationed on the Oklahoma from January of 1941.

With Walter’s loss at Pearl Harbor Burbank was thrown into the war with the harsh reality that there would also be many more of her sons and daughters that would be lost before it was over.