“We are asking that each person attending a homecoming game bring a couple of non-perishable food items, such as a can of soup or box of pasta,” said Kimberley Clark, Public Information Officer for the Burbank Unified School District. “Hygiene items such as bars of soap, shampoo, toothpaste, and toothbrushes are needed, as well. In addition, baby formula and diapers are always appreciated.” 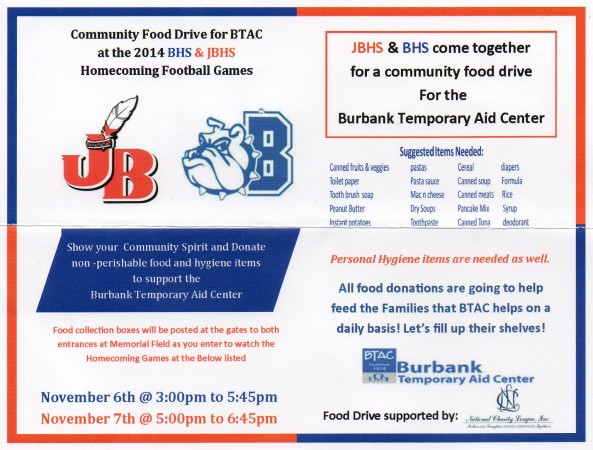 Volunteers from the NCL will collect donated items at the entrance gates to Burbank’s Memorial Field, at John Burroughs High School. NCL began the food drive to benefit BTAC in 2013.

The food drive also kicks off the NCL’s membership drive, according to Arlina Mayor from the national service organization’s Burbank chapter.

The Burbank chapter of the NCL was chartered in 1960 and organized by grade level from seventh grade to twelfth grade. Burbank NCL coordinates charitable activities by mother-daughter teams, integrating with social, cultural, leadership and philanthropic training.

“If you are planning to attend the Alumni Association’s Pregame Homecoming Tailgate Party in the district office parking lot, our volunteers can take your donations there, as well,” added Clark. “Let’s show how much community spirit we have and make this BTAC Food Drive a huge success. Let’s go, Bulldogs and Indians!”

The Burbank Temporary Aid Center was founded in 1974 and since that time has been providing short-term emergency assistance to Burbank’s working poor, homeless, senior citizens and crime victims through a variety of programs.