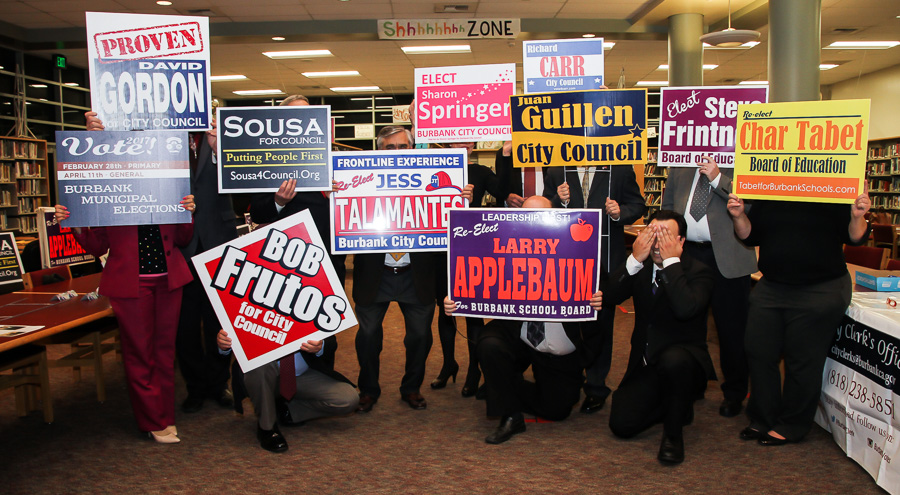 Even though the election was held Tuesday, Burbank’s all-mail election results were not finalized until Friday afternoon.  Because of a new California law requiring all ballots in mail-in elections be counted that are postmarked by election day, close to 1,000 ballots came in after Tuesday’s first count.

That count had both current Councilmen Bob Frutos and Jess Talamantes elected with both over 50% over the count of total ballots.  However, the additional days and ballots brought Frutos under the 50% threshold forcing him into the General Election to be held April 11. This will also be an all mail election.

Burbank City Clerk, Zizette Mullins, announced that final results for Burbank’s Primary Nominating Election. Of the 66,711 eligible voters, 10,902 ballots were cast (10,190 ballots were cast in the 2015 Primary), representing a 16.34 percent return rate. With all ballots verified and counted including the mail received on March the 3rd at noon and the ballots that were pending verification by the Los Angeles County Registrar/Recorder’s Office.

There were eight candidates who qualified for the ballot for the three City Council seats (in ballot order):

Talamantes received a majority of the votes cast and therefore is duly elected to office for a full term of four years, ending April 30, 2021.

There was one candidate who qualified for the ballot for the City Clerk seat (in ballot order): Current City Clerk Zizette Mullins (7,946 votes) and City Treasurer Debbie Kukta (7,972 votes) both ran unopposed and were re-elected

Three candidates ran for two Board of Education seats (in ballot order): Steven Frintner (5,745 votes), Charlene “Char” Tabet (5,510 votes), and Larry Applebaum (5,398 votes). Frintner and Tabet received a majority of the votes cast and were elected to office for a full term of four years, ending April 30, 2021.