A garage fire on Santa Anita Ave. Friday morning sent up a large cloud of smoke that hung over the hill area of Burbank for some time even after the fire was extinguished. 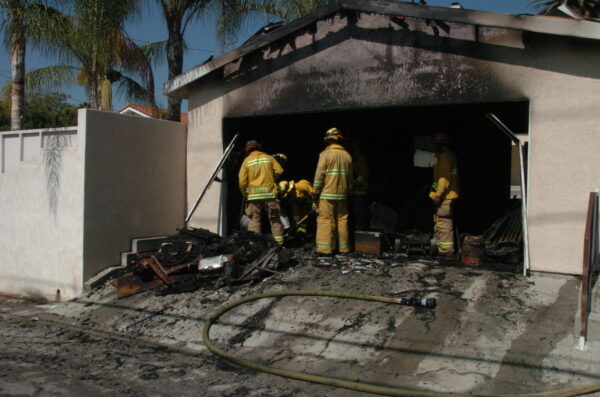 The Burbank Fire Department received a report of a garage fire at 9:05 a.m. and responded with a full assignment to 1062 E. Santa Anita Ave.  The location is about 300 feet west of Sunset Canyon Dr.  The first engine company on scene reported a single family house with heavy smoke coming from the rear.   Firefighters were able to get to the detached garage from the alley behind the home.

Initial reports were that the garage may have been converted to living quarters.  This triggered a response in which firefighters pull additional hose lines, a use more personnel for search and rescue, and fire control.  However it was determined that the garage was not a living quarters, and it was unoccupied.  A total of 21 Burbank Firefighters quickly brought the fire under control, with no reported injuries to civilians or emergency personnel.  Knockdown of the fire was reported at 9:23 a.m.

A Fire Investigator determined that the fire was caused by electrical problems.  Damage to the structure was estimated at $50,000, and $10,000 to the contents.  The house and nearby homes were not damaged by the fire.