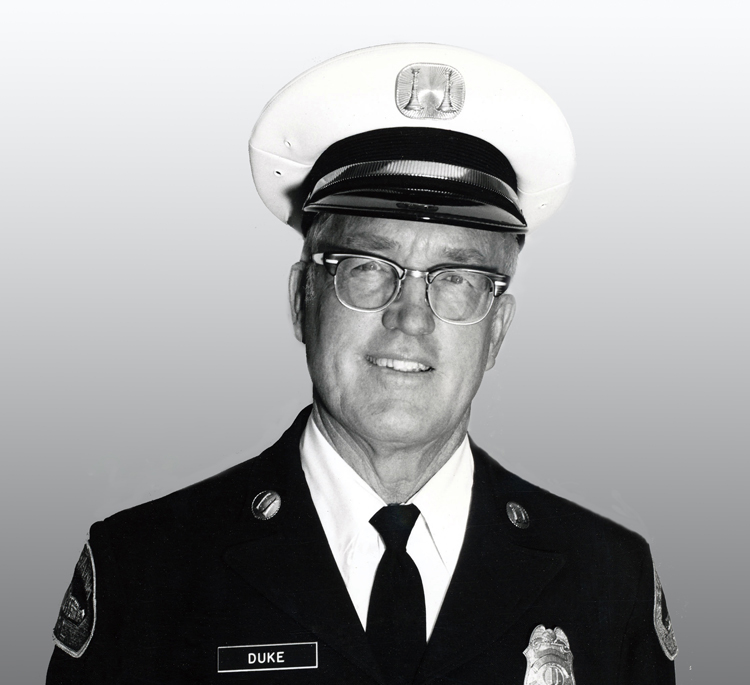 Born in Arco, Idaho in 1922, to Roy and Hazel Duke, Glen had seven brothers and sisters.  The family moved to Long Beach, before settling in Burbank.  He graduated from Burbank High School in 1940, and began working for the City of Burbank in the Public Service Department (now Burbank Water and Power) in September 1940 as a meter reader.

His career with the City of Burbank was interrupted by World War II.  Glen enlisted in the U.S. Army Air Corps in 1942, serving in the Philippines.  He left the Air Force in 1946, and returned to Burbank and his job with the City.

Glen joined the Burbank Fire Department in April of 1953.  In 1971 he was promoted to Engineer.  In 1974 Glen was promoted to the rank of Captain.  During his career with the fire department he was instrumental in setting up their dispatch system.  He worked as an arson investigator.  Glen was probably best known for his work in the Fire Prevention Bureau.  He taught hundreds of children in the Burbank Schools about fire safety.   Glen was the first firefighter to be teamed up with the police department working on the Neighborhood Watch program.   He retired from the Burbank Fire Department in 1977.

Glen served on the Burbank Civil Service Commission from 1985-1993.  He was a member of the Veterans’ Commemorative Committee since its inception in 1994.  He was also a member of the 4th of July Committee.  Active in his retirement, Glen bought a motor home and toured the country.  He and his wife enjoyed gold panning.  He loved auto racing, having attended the Indianapolis 500.  He was well known for his skill as a pool player at Pickwick. Glen leaves a host of friends who enjoyed his humor.  He always had a joke or story to tell.

On Friday at 10:30 a.m. a procession will form at the Valley Funeral Home.  It will then proceed one block to Fire Station 14, where Engine 14 will escort Captain Duke to Glen Haven Memorial Park for the graveside service at 11:30 a.m.

Burbank City Council Ashley Erikson - March 3, 2021 0
The Burbank City Council met virtually on Tuesday, March 2, 2021 and opened the meeting in adjournment of retired Burbank Fire Captain, Guy Thompson, who served the Burbank Fire Department for 33 years. Mayor Bob Frutos proceeded with some announcements to the public including an online community workshop for the Burbank Housing Element hosted by the Community Development Department on February 27th from 11:00am-12:30pm.