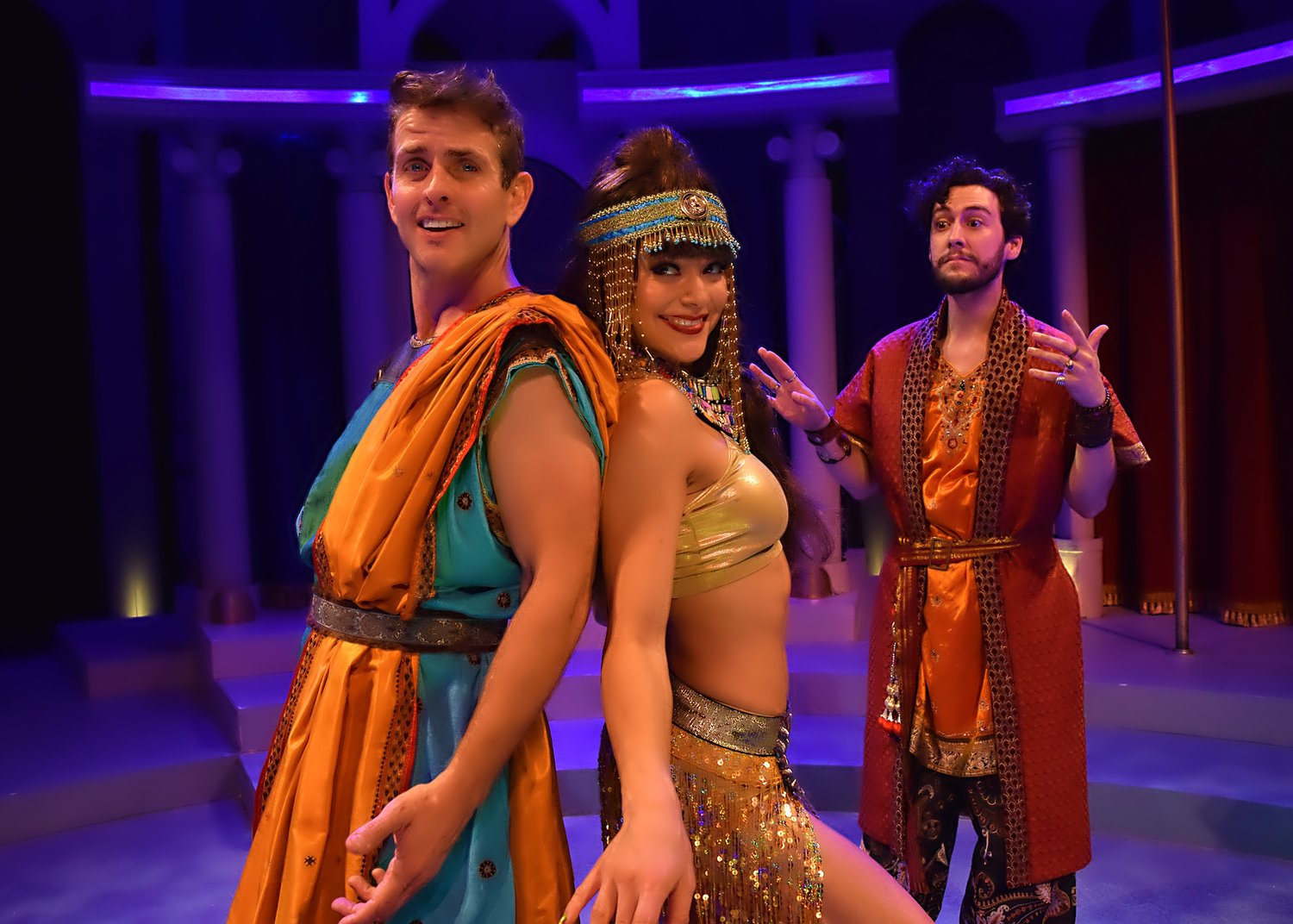 From now until New Year’s Eve, A Funny Thing Happened on the Way Happened to the Forum is playing at the Garry Marshall Theatre. If you enjoy laughing and having a great time, then you are going to want to see this Sondheim musical.

For those of you who only know the 1966 movie based on the stage production, you will be surprised how much different, for the better, this production is than the film. The big screen version is very Mel Brooksy. Don’t get me wrong, I love Mel Brooks and every movie he did, but this version is more of like an adult Disney fairy tale. I am saying this because the two male leads easily look like they could play the Prince and the villain in those G-rated features.

Before we get to Hero (Michael Thomas Grant) and the Captain (Clayton Snyder), let me tell you about the play. A Funny Thing takes place Ancient Rome and tells the story of forbidden love. Hero, is the son of wealthy parents, Senex (Kevin Symons) and Domina (Candi Milo), and he is love with a Courtesan in the house next to his that is run by Lycus (E.K. Dagenfield). Only thing is that she has been sold to a Captain who is coming to pick her up the next day. Thankfully, Hero’s slave, Pseudolus (Joey McIntyre), wants his freedom and will do anything to get it. Therefore, he comes up with a plan to get Hero and the virgin, Philia (Nicole Kaplan) together. What happens next is a comedy of errors which brilliantly comes together at the end. The whole show will leave you laughing and smiling for hours afterwards. So much so, you will want to buy a ticket when the curtain goes down to see it again.

I saw A Funny Thing with McIntyre as the lead and he plays the role with such the right stuff, it should forever change how the part should be played. In the past, Zero Mostel, Phil Silvers and Nathan Lane, have played the part and let’s be honest they can be over the top. Something that the New Kid on the Block does not do. He plays it with just the right amount of comedy without you being exhausted by his performance. In addition, you can tell that he has Broadway experience. He will be with the show until December 10th. Paul C. Vogt takes over the following week.

Grant reminds me of the living version of Prince Philip from Sleeping Beauty with a voice that will sends you to sleep happy. When he sings, you listen to ever word he says. I could be saying that because in one song, he only sings one word. Anyways, he also knows how to make a funny moment even funnier with his facial expressions. This is his Garry Marshall debut and I do not think this is the last time we will see him.

Snyder plays Captain Miles Gloriosus and he reminds me of Gaston from Beauty and the Beast and Tangled’s Flynn. The rough and tumble guy with the potential of being a bad boy. When he finally makes his entrance, you will not be able to take your eyes off him because he commands the stage. There is just something so manly about him that everyone will be attracted to him.

Kaplan is a mix of Aurora and Rapunzel with the perfect of amount of innocence and nativity. Her beauty lights up the stage like Rapunzel’s hair.

Then, there are Hero’s parents who remind Fred of Wilma Flintstone, which of course is based on The Honeymooners. Together, they are in love, apart they get into trouble. The onstage couple bring a level of comedic timing that will make you chuckle whenever they are in front of you.

Dagenfield plays not one but two very different roles. His first is Lycus, a shrewd businessman who can easily be manipulated. His other role, I will leave as surprise and you will look forward to every time he comes around and around.

Ethan Cohn plays the lead slave at Senex’s house and he is the character actor that ups every moment he walks through the door. In addition, he looks beautiful in a dress, but I have said too much.

Finally, there is Vanessa Nichole, Shamicka Benn and Liz Bustle, who play several roles throughout the show. Each woman is beyond talented with every singing, dancing and number they are involved in. Nichole uses her acrobatic ability to work the pole, so much so even strippers will be jealous of her for it. I should mention, the other two women are not to shabby with their moves either.

How can I review a musical and not talk about the music? You will go home with several of the show’s tunes stuck in your head for days and even weeks to come as you would with any Sondheim production. Numbers like Comedy Tonight, Free, Lovely and That Dirty Old Man.

All of them together, equals 2-hours of live entertainment that you soon will not forget, not will you want to.

A Funny Thing on the Way to the Forum runs through December 31st with performances on Thursdays and Fridays at 8p, Saturdays at 2p and 8p and Sundays at 3p and 7:30p. Tickets are available at the box office at 4252 W Riverside Drive, calling (818) 955-8101 and online. Run to the forum now to the see the funny thing that happened.