Editor’s Note: While there’s always a lot going on in Burbank, myBurbank’s new section “Get Out Of Town!” highlights some of our favorite activities and events outside the town borders.

The evening begins at 6:00 p.m. at the Laemmle NoHo 7 with Poets4Progress. Three 45-minute rounds on the hour follow, showcasing a variety of styles and works. 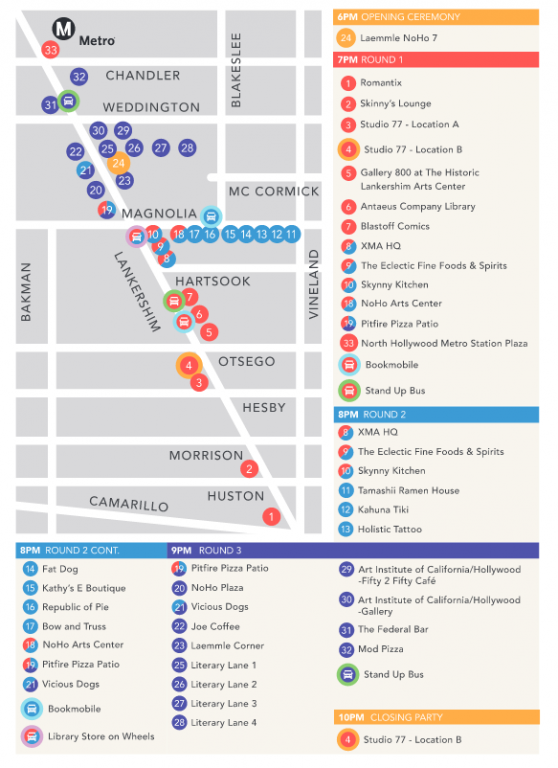 The festivities wind up with an after party “Speak-Easy” at Studio 77. Admission to the after party is $15.

Writers from throughout Los Angeles and the San Fernando and San Gabriel Valleys are slated to perform.

Musician Dave Kendrick hosts “From The Mouths of Musicians” at the Federal Bar at 9:00 p.m., featuring himself, Leslie Bohem, Johnette Napolitano and Chris Desjardins.

The Lit Crawl originated in 2004 as part of Litquake, San Francisco’s Literary Festival, an annual event attracting thousands of attendees. San Francisco’s Litquake literary festival runs every October along with other annual Lit Crawls in NYC, Seattle, Iowa City, Austin, London, Helsinki and Portland. In 2013, Lit Crawl L.A. was founded as a project of the Litquake Foundation and of the Pasadena Arts Council’s EMERGE program.