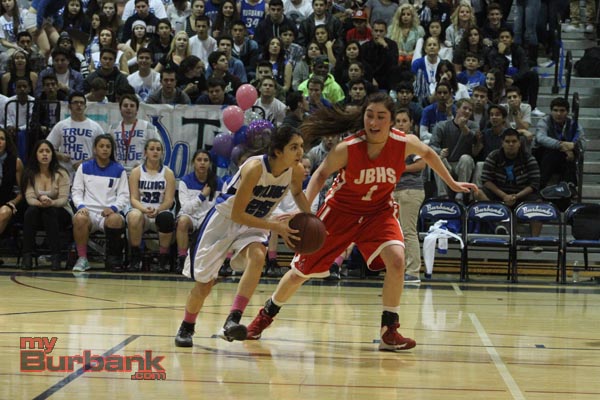 It’s rare when Burroughs and Burbank High’s girls’ basketball teams each have a player who can elevate her game and their team as well.

Del Castillo comes off a campaign in which the four-year varsity starter was tabbed Pacific League first team after the Indians went 14-0 in league, 24-7 overall and earned a CIF Southern Section playoff berth.

“I just want to continue working hard to improve as a basketball team and as individuals throughout the season,” Oganyan said. “When it comes to league, we want to make sure we are fully prepared for every opponent and go out and compete every game to our maximum potential.”

Oganyan knows she has the right leader in Del Castillo, who will play basketball at San Diego Christian.

“We are looking for her to be a terror on defense and rebound for us, as well as score this year,” she said. “Davina really makes our team go and has improved her offensive game and has been a scorer.”

Across town, Sa’dullah, who averaged 22 points in league and 18 points overall which helped her garner co-league Most Valuable Player honors a year ago, and a spot on the CIF second team, offers the same value for Burbank coach Bruce Breeden.

“She’s a team player and a leader,” he said of Sa’dullah, who will play for the University of West Virginia next year. “She gets her teammates involved and makes us better.”

Like Oganyan, Breeden feels the same way about the season.

“Our expectation is to challenge for the league title,” Breeden said. “The league is very competitive. I think Burbank, Burroughs, Arcadia, Crescenta Valley and Glendale are greatly improved. This is the most competitive it’s been in the 10 years I’ve been here.”

Burroughs opens league play at Pasadena on January 5, while Burbank will be at Arcadia on Jan. 6.

The Indians are 4-1 after placing second in the Burroughs Optimist Tournament championship game, losing to Harvard-Westlake, 38-28, while the Bulldogs, who went 18-12 and 10-4 in league for third place along with a playoff appearance last season, are 4-5 after going 2-3 in the same tourney.

Helping Del Castillo, who was named to the all-tourney squad, will be four-year varsity starter Delaney Nicol, a point guard who dropped five points versus Harvard-Westlake.

“Delaney runs the team really well and sets up scoring opportunities for others,” said Oganyan of her senior captain.

Also in the backcourt will be Brooke Radcliffe, a junior, who scored a team-best 10 points versus the Wolverines.

“Brooke is very aggressive and a great defensive player,” Oganyan said. “Her offensive game has improved and she’s a great rebounder.”

Abbey Ibarra is a junior guard with excellent defensive skills.

“Abbey is a great defensive player, aggressive and creates scoring opportunities,” Oganyan said. “Her defense has improved and so has her outside shot.”

Sienna Brown is a senior power forward/center, who was also selected to the all-tourney team.

“Sienna is a great rebounder, very athletic and a scoring threat from the outside,” Oganyan noted.

Jordan Meltzer is a versatile junior, who can play in the front and back court. “Jordan’s a scoring threat and a solid rebounder,”Oganyan offered.

Haley Wilson is a senior forward. “Haley is tough as nails, a fantastic rebounder, and is a very tough defender,” Oganyan said.

Kamryn Cardenaz is a sophomore guard. “Kamryn is a real scoring threat off the bench and a terrific rebounder,” Oganyan said.

This is senior guard Chloe Takeuchi’s first year on the varsity. “Chloe has a good outside shot, and is a play-maker off the dribble in the open court,” Oganyan said. “She can play anywhere on the court except center.”

Destiny Contreras is a senior guard. “This is Destiny’s first year on the varsity,” Oganyan said. “She hustles and is a tough rebounder.”

Marin Grote is a 6-3 freshman center. “Marin’s still learning the game,” Oganyan said. “She’ll be a factor defensively for us.”

Maile Tanigawa is a sophomore guard who injured her ACL, and didn’t play basketball for two years. “Because of her injury, Maile will see limited minutes this season,” Oganyan said.

Melissa Garcia is a senior guard who transferred from Alemany. “Melissa can play anywhere on the court. We could use her at guard or forward,” Oganyan said.

Aside from Sa’dullah, the Bulldogs are loaded with talent including senior center Anastasia Tsybaeva, who is listed at 6-6.

“Anastasia is still learning the game, and it’s her first year on the varsity,” Breeden said. “Because of her height, she can alter a game.”

Senior small forward Abby Troy will be counted on to provide points and defense. “She’s really improved and is a hard worker,” Breeden said.

Ani Temurian is a senior shooting guard, who sparkles on defense. “This is Ani’s second year on the varsity and she can hit the three-pointer,” Breeden noted.

Senior shooting guard Sabrina Rios is making her initial foray at the varsity level, and can light up a gym from distance. “Sabrina is a terrific outside shooter,” Breeden said.

Sarah Sarquiz is a sophomore small forward. “She’s tough as nails and has developed an outside shot,” Breeden said.

Ani Sarkisyan is a senior point guard. “This is her first year on the varsity, and she’s an outstanding defender,” Breeden said.

Next up for Burroughs is a trip to Hawaii for a holiday tournament and Burbank will compete in the West Coast Holiday Classic after Christmas.