The U.S. Postal Service (USPS) has issued the final determination to close Glenoaks Station, 1634 San Fernando Road in Burbank, CA, and consolidate P.O. Box service into the Downtown “Bob Hope” Station, 135 E. Olive Ave, which is about one mile away. P.O. Box numbers and ZIP Code will remain the same.

Congressman Adam Schiff has fought to keep the facility open and said, ““Today’s announcement by the Postal Service is another example of a deeply misguided strategy of closing locations and degrading quality in the hope of balancing its books – over the long term, it is a slow death by a thousand cuts. Instead, the Postal Service should work with Congress to pursue a larger, more comprehensive approach to its financial health.  The root of the USPS’ financial problems stem from a multi-billion dollar prefunding obligation imposed on this agency alone and the overpayment of billions to the federal government. The closure of the Glenoaks postal facility will only hamper residents’ ability to access the mail and hurt local businesses.”

Schiff previously wrote a letter to U.S. Postal Service (USPS) Postmaster General Patrick Donahoe to keep the Glenoaks Post Office in Burbank open. Schiff is a sponsor of the Postal Service Protection Act (H.R. 630), which would allow the USPS to use the funds it has previously overpaid in retirement benefit liabilities to meet the prefunding requirement.

In the letter to Donahoe earlier this year, Schiff wrote: “Closing the Glenoaks Post Office would leave Burbank with only two full service Post Offices. While smaller post offices would still continue to operate in the City, those post offices would not offer City residents and businesses the same level of service as the Glenoaks Post Office and as a result residents and business owners would suffer a significant degradation in service. Small business owners and families who rely on the Post Office on a daily basis to help their firms grow, or to receive prescription medication, will likely have to travel far to conduct their business with USPS.” 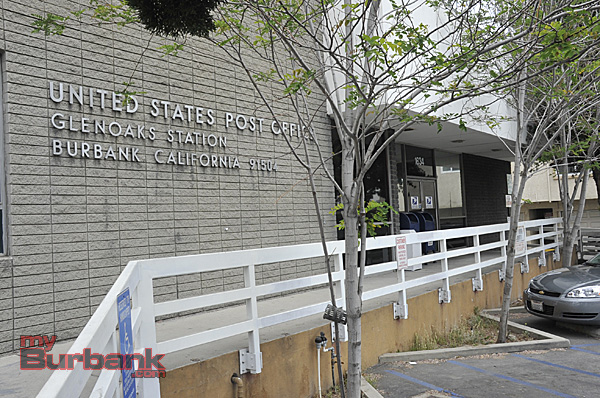 USPS owns the building at 1634 San Fernando Road and plans to sell it when the consolidation is complete.

This final determination to consolidate the Glenoaks Station may be appealed by any person served by that office to the Postal Regulatory Commission. Appeals must be received within 30 days. Submit appeals to: