“The World of Aviation and its Heroes” is the theme for Burbank on Parade and what better way to salute this supersonic celebration than having two legends of flight as grand marshals. 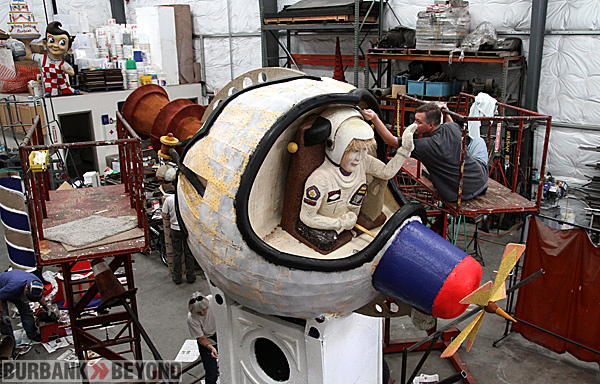 Burbank Tournament of Roses entry into this years Burbank On Parade gets some fresh paint and touch up before the April 14th parade.(Photo by Ross A. Benson)

Aeronautic super stars Robert Gilliland and Clay Lacy will lead off the parade, which will begin at 11 a.m. Saturday, April 14, and travel down Olive Avenue from Keystone to Lomita.

Gilliland flew the first flight of the SR-71 #950 on Dec. 22, 1964 at Palmdale, Calif., flying for one hour at more than 1,000 mph. He continued to be the first pilot to fly each Blackbird as it became operational, logging more experimental supersonic flight test-time above Mach 2 and Mach 3 than any other pilot.

Lacy has flown more than 50,000 hours, and holds 29 current world speed records. He’s done cinematography for movies such as “The Right Stuff”, and was instrumental in the development of the Learjet. He started Clay Lacy Aviation, the first jet charter service west of the Mississippi, which is based at Van Nuys Airport. He flew for United Airlines for more than 40 years and was its #1 pilot.