Adding to the event’s intrigue, Universal’s most popular rides and attractions will also be open to guests, including the new critically-acclaimed mega-attraction, “Transformers TM:  The Ride—3D,” “Jurassic Park® In the Dark,” “The Simpsons RideTM” and “Revenge of the MummySM – The Ride.”

For more information and to purchase tickets, including options for Front of Line tickets that enables priority access at each maze and theme park attraction, and special Killer Deal Nights tickets to save up to $25, guests can visit www.UniversalStudiosHollywood.com/hhn,.  Advance purchase is recommended as event nights will sell out.

“The Walking Dead: Dead Inside”

A virtual three-dimensional journey into the television series, “The Walking Dead: Dead inside,” will have “Halloween Horror Nights” guests literally walking in the doomed footsteps of the tormented humans left to roam Atlanta’s devastated suburban countryside as they battle a horde of predatory zombie “walkers” who have awakened from the dead to feast on the living.

Eerily authentic, “The Walking Dead: Dead Inside” maze will feature elaborately designed and disturbingly real “walkers” and sets cast from the molds and designs used to create the series. The riveting and immersive experience will match the show’s terrifying intensity that is both memorable and disturbing.

Universal Studios Hollywood is collaborating with AMC and the show’s creative team, including Greg Nicotero, Co-Executive Producer and Special Effects Makeup-up Artist for the series, to create an experience that is frighteningly realistic to the show.

“We want people to experience the same terror of the walker-filled reality our characters faced in seasons one and two – and will continue to face in our third season,” said Nicotero. “Our collaboration with Universal Studios’ creative teams is exciting as we work to truly capture the essence of the show.”

A similar maze will appear at Universal Orlando Resort.

“Terror Tram:  Invaded by The Walking Dead,” also based on the hit AMC TV series, will unleash hordes of flesh-eating and blood-drooling “walkers” on Universal’s world-famous backlot during Halloween Horror Nights, exposing guests to a legion of plagued zombies in the aftermath of the disease’s cataclysmic spread to the West Coast.

The world of television fantasy will collide with grim reality when “Terror Tram:  Invaded by The Walking Dead” pits guests face-to-face with a swarm of living corpses doomed to stalk Universal Studio’s famed backlot—-the heart of the world’s original horror moviemaking studio.

“The ‘Terror Tram’ is one of the most popular ’Halloween Horror Nights’ attractions since it’s the only time people can walk on the historic Universal backlot where the horror film genre was born,” said John Murdy, Creative Director, “Halloween Horror Nights”.  “The juxtaposition of the backlot’s rural setting amid a small town devastated by a horrific plane wreckage complements the TV series’ sets almost to a tee and provides the ideal backdrop to showcase  the ‘walkers’ from AMC’s ‘The Walking Dead’ on a grand scale.”

A marquee attraction unique to Universal Studios Hollywood and “Halloween Horror Nights,” the “Terror Tram” combines a ride aboard Universal’s signature trams with a terrifying walk-through experience through world-famous movie sets including Steven Spielberg’s “War of the Worlds” and the infamous Bates Motel and Psycho House from Alfred Hitchcock’s signature film.

The dark and twisted maze, a fusion of the “Silent Hill” video game, the 2006 film and its highly-anticipated sequel, “Silent Hill:  Revelation 3D,” opening nationwide on October 26, 2012, will lure guests into the town’s once rural mining community, now ash-laden following the aftermath of a devastating industrial fire.

“Welcome to Silent Hill” will beckon guests into its eerily desolate town, inhabited by “The Order,” a fanatical religious cult bent on terrorizing existing inhabitants with barbarous acts of ritual violence.  Guests will be recruited into the hell that is Silent Hill, where they will traverse the environs of the town’s dual dimensions of “Fog World” and “Other World,” and fluctuate between a universe shrouded in dark, dense fog and that of a place cloaked in rust, decay, blood and flesh.

The inexplicable account of terror and torture of an innocent child, Alessa, sacrificed at a burning stake in a misguided attempt to bring about new world order is what caused the town’s dichotomy, and guests will be exposed to the agony, hatred and unspeakable sins that ravaged the small town of Silent Hill.

A similar maze will appear at Universal Orlando Resort.

Multi-platinum recording artist Alice Cooper, a mastermind of the rock horror genre, will conjure up his peculiar vision of disturbing horror imagery when he makes for an encore performance at Universal Studios Hollywood in a new “Halloween Horror Nights” maze.

Alice Cooper’s new haunted attraction, “Alice Cooper Goes to Hell 3D,” will be inspired by the musician’s classic concept album centered on unending darkness, relentless torment and unimaginable horrors.  The terrifying experience will beckon guests to teeter at Hell’s interminable inferno as imagined through the eyes of this hard rock visionary.  To maximize this daunting new maze, guests will don 3D glasses for an optimum up-close and personal three-dimensional encounter with Alice Cooper’s underworld.

This original, one-of-a-kind maze will feature trademark elements from Alice Cooper’s celebrated stage performances including guillotine decapitations and electric chairs and will be fueled by an infernal soundtrack culled from Alice Cooper’s six-decade, Hall of Fame career.  Paired with the concept of the Seven Deadly Sins, the maze will spiral guests through Alice’s vortex of hades where they will encounter a series of sin all under the influence of music. For example, Gluttony will emerge through the song “Eat Some More.”  Wrath will be exposed through the song “Killer.” Greed will manifest itself in Alice Cooper’s “Sick Things” song, and Lust will transcend through the song, “Sex, Death and Money.”

Sharing his enthusiasm, Alice Cooper said, “I grew up watching classic Universal horror movies so it’s a thrill for me to work with Universal’s designers to create the quintessential Alice Cooper maze for Halloween Horror Nights at Universal Studios Hollywood.  Last year, Universal Studios Hollywood scared the wits out of me with their maniacal and demented creation and they’ve promised to up the ante with ‘Alice Cooper Goes To Hell 3D.’  I can’t wait to see the final terrifying masterpiece. It will be hell!  Let’s see if they can scare me!”

An Alice Cooper-inspired maze, “Welcome to My Nightmare,” will appear at Universal Orlando Resort.

“The Texas Chainsaw Massacre:  The Saw is the Law”

The tragic and demented account of Leatherface and his deranged family of cannibals set the stage for this year’s new “Halloween Horror Nights” maze, “The Texas Chainsaw Massacre: The Saw is the Law,” based on filmmaker Tobe Hooper’s notoriously unsettling 1974 horror film classic.

The chilling new maze will mirror the original American horror film classic, hailed among the most influential horror movies in cinematic history, and recount the story of five friends who unsuspectingly fall victim to the ghastly terrors and torment of a depraved and cannibalistic Texas clan.  Those who dare to step into the inner workings of a slaughterhouse maze will be gripped with vivid telltale signs of imminent doom.

Gruesome and blood-soaked scenes from the controversial movie will terrorize guests, rendering them defenseless when their senses are overcome with nightmarish images flashed from the movie’s most memorable scenes:  mutilated bodies dangling from bloody meat hooks; putrid odors of decomposed corpses and human remains, and animal pelts suspended from the ceiling, as they try to escape from the unmistakable sound of roaring chainsaws revving to life.

La Llorona, the fearful story of melancholy and murder that has terrified Mexican and Latin American children for generations, returns to Halloween Horror Nights, recounting the tortured tale of a mother who drowns her children in a desperate attempt to win a lost love.  When her attempt fails, she drowns herself and is doomed to wander the earth forever after.

According to the legend, La Llorona’s eternally piercing nocturnal cries—“My children!  Where are my children?”—can be heard as her frail, drenched body lurks throughout the dead of night.  Her unsightly presence elicits unwavering dread from the helpless village inhabitants or maze guests as it woefully signifies impending death.

“La Llorona:  Cazadora de Niños,” which translates to “Weeping Woman:  The Child Hunter,” will feature elaborate sets depicting scenes of a small Mexican village and will tell the haunting story through the mind’s eye of a child, riddled with despair and dread, gore and evil.

Universal’s infamous legacy of horror will come to an afterlife in “Universal Monsters Remix,” an all-new terrifying experience that re-imagines the classic horror icons of yesteryear for the 21st century and immerses them in the twisted confines of electronica-inspired music during “Halloween Horror Nights.”

Set within the antechambers of an eerily gothic castle, the new “Universal Monsters Remix” maze will unleash a cast of movies’ most legendary creatures, including Frankenstein’s Monster and his Bride, Dracula and his Brides, Phantom of the Opera and The Wolf Man.

From deep within the stone fortress, accompanied by ominous strobe lighting effects, guests will traverse dark and dank arteries of rotting catacombs, hallowed underground crypts and pagan sacrificial burial chambers.  Laced with the murmur of dialogue from Universal’s catalogue of horror films, guests will be besieged by the relentless sounds of high-energy, horror-inspired dance, dub-step and industrial music.

Lurking in dark corners and prowling for prey throughout “Halloween Horror Nights” are countless “scare-actors” and numerous horror-filled “Scare Zones” designed to startle, shock and scare guests at every twist and turn.  This year, “Scare Zones” will provoke a new sense of terror in guests.

Silent Hill: The most depraved small town residents will mercilessly torment anyone who treks into the “Silent Hill” Scare Zone corridor.  While the infamous Bogeyman seeks revenge, a group of hideously disfigured Nurses prepare to scar – physically and emotionally – unsuspecting victims that step into their path.  There will be no way of escaping the plight of his “Silent Hill” Scare Zone when Pyramid Head, the ruthless executioner of the “Other World” stabs aimlessly in the dark for a target in the dead of night.

Toyz:  Desperate times have taken a pathetic toll on the once friendly neighborhood Toy Maker.  A deceitful storefront façade beckons entry to “Toyz,” a seemingly blissful playland that juxtaposes the inner terror plaguing the shop where cruel and unspeakable horrors await.

Witches:  A coven of “Witches” burned at the stake to purge a local seaport village of their pagan influence has left this clan of black art sorcerers hell-bent on revenge.  Hunted and killed like wild animals, the Witches” swore eternal vengeance on their blood-thirsty killers and return on autumn nights to exorcise justice on those in their midst by burning the living.

Killer Klownz:  The circus may have come to town, but it is the “Killer Klownz” that are running the show in this gang-filled Scare Zone of violent killer clowns whose three ring circus entertains to the applause of murder and mayhem.

Party on as these two most excellent dudes return to skewer some of the biggest names in Hollywood. With astonishing topics torn from the pages of today’s most salacious tabloids and acid-tongue bloggers, the kings of comedic satire spin pop culture and celebrity public blunders into riotous laughter.  Bill and Ted, never without their most excellent time-traveling phone booth, add hilarity to the already ridiculous for sublime parody performances in the return of the very popular “Bill & Ted’s Excellent Halloween Adventure.” 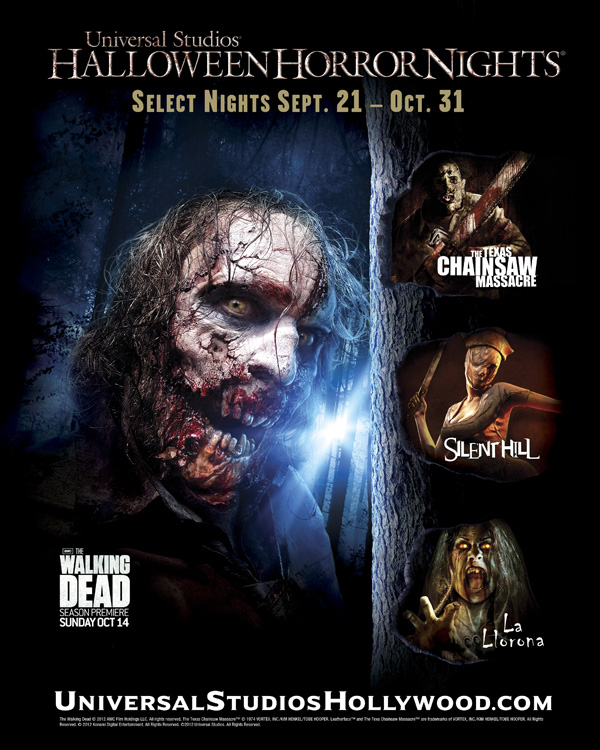