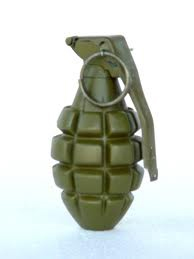 The Bomb Squad was called out after hand grenades and other military-type explosives were found in a Burbank garage.

Around 9:45 a.m. Thursday, Burbank Police officers responded to the 2000 block of Parkside Ave.  A man reported that he and other family members had found the devices while cleaning out a relative’s garage.  They had found five hand grenades, and three apparent rocket-type explosive devices.

Neighbors were evacuated from the area, and the Los Angeles County Sheriff’s Office bomb squad was called.  Sheriff’s Arson/Explosive personnel were on scene within 20 minutes. They visually inspected the devices, and determined that they were inoperable and not in danger of exploding.   The devices were removed for disposal.

Once the “all clear” was given, residents in the area were able to return to their homes.