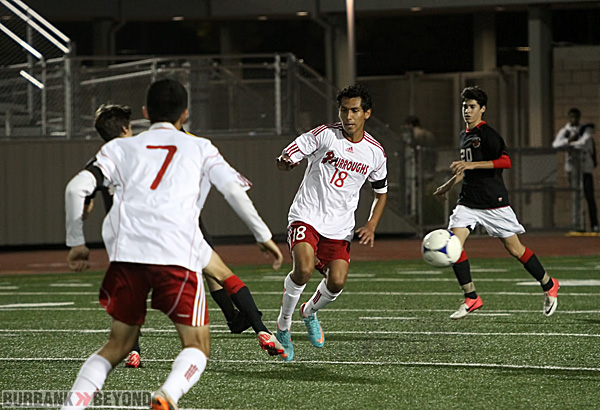 From Burroughs Coach Mike Kodama- “We were down 2 – 0 at halftime and were being dominated by La Canada. We came out better in the second half but then allowed another goal and were losing 3 – 0.

Xavi Izqueta scored at 58 minutes to cut the Spartans lead to 3 – 1. VJ Salazar crossed the ball to the back post and Xavi headed it in.

Still, we could not get many opportunities but we were patient and yet at the same time much more aggressive.

We finally scored the second goal with three minutes left in the game. Xavi scored his second goal of the game with a blast from the edge of the penalty box off a nice pass from Jorman Herrera.

In injury time, we had a lot of players in the penalty box. We lofted the ball into the box and the referee called a penalty kick because a La Canada player got caught reaching out and touching the ball with his hand. Jorman took the penalty kick to tie the score with less than a minute left to play.

A great comeback – the boys showed they had a lot of heart. Only the third time ever to come back from three goals down.”