Yesterday, November 21, at 1:49 p.m., a Burbank Police Sergeant had completed a traffic citation at S. Lake St. and W. Verdugo Ave. when he heard a car accelerating and arguing voices. The officer directed the driver of the vehicle, a 2003 tan Honda Accord, to pull over. The vehicle turned the corner and headed northbound on Lake St. When the officer turned the corner, the vehicle had disappeared. 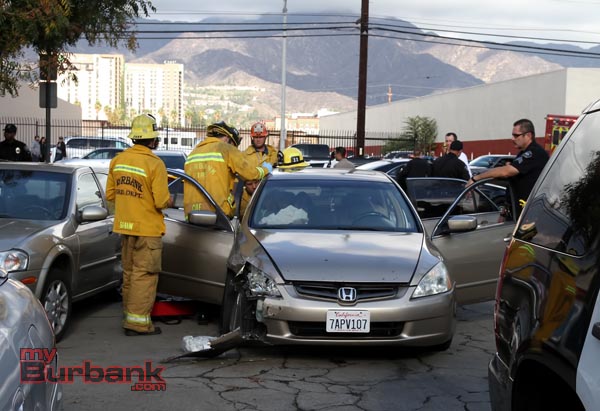 Burbank Paramedics treat a victim that was left behind after a hit & run at Lake St. & Tujunga Street, the suspect fled on foot and was apprehended a couple of blocks away .(Photo by Ross A. Benson)

The Sergeant continued northbound on Lake St. and saw the Honda Accord in question crashed into a parked car, a 2001 tan Nissan Maxima, on W. Tujunga Ave. near the corner of Lake St. The driver was not in the vehicle. A group of individuals directed the Sergeant to a direction between two apartment buildings on Tujunga Ave., so the Sergeant called for reinforcements and BPD airship support and Burbank Police set up a perimeter.

The Sergeant then noticed a female with facial injuries in the suspect’s Honda Accord. She was transported by paramedics to Providence St. Joseph’s Hospital for treatment. The suspect, Saequon Winston, age 27 and a resident of Greensboro, NC, was found and handcuffed and seated at the curb. While waiting for witnesses to identify the suspect as the driver of the vehicle, Mr. Winston started kicking officers, so he was turned over and leg restraints were placed on him. 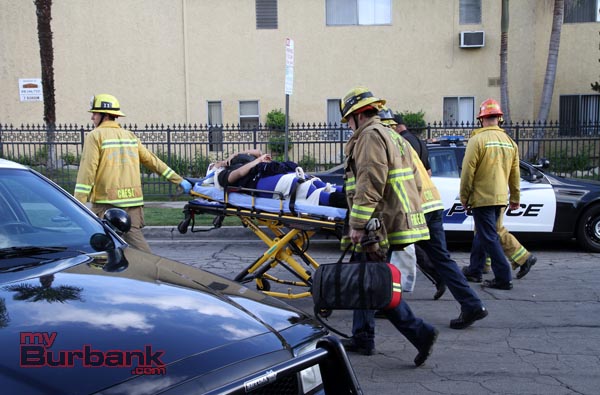 The Honda Accord was registered to an address in Virginia, but illegally had CA license plates. The investigation is ongoing, according to Sgt. Darin Ryburn of the Burbank Police Department.There were no indications of alcohol or drugs with the suspect; he was not injured nor were the officers injured. Mr. Winston was taken to the hospital, then released and cleared for booking.

Mr. Winston was booked for Felony Hit and Run at the Burbank Jail with a bail set at $50,000. He is due in court on Monday, November 25. 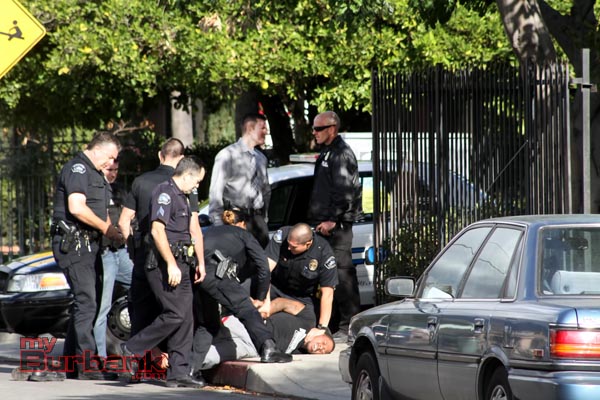