Police try and locate a man who climbed tree trying to escape after a hit and run crash (Photo By Ross A. Benson)

Burbank Police responded to the northbound I-5 freeway on-ramp at Scott Road early Tuesday morning to find a Red Toyota embedded into the fence.  The driver, who apparently fled on foot, appeared to have injuries. The Burbank Air Unit responded and with the use of the Flir [Forward Looking Infred Camera] they located the suspect 25 to 30 feet up to the top of a tree across the freeway. 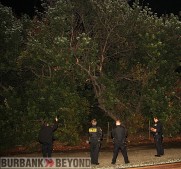 Burbank Police surround a tree that a man had climbed trying to escape. (Photo By Ross A. Benson)

After several requests to come down, the suspect refused. The CHP closed the southbound freeway for nearly an hour, for the safety of the officers and in case the suspect came down and attempted to flee again by running across the freeway.  Burbank Fire Department was requested in the case the suspect fell the 25 feet from the top of the tree.    After about an hour the suspect finally fell from his high perch, was taken into custody and transported to Saint Joseph Medical Center to be checked out. His car was impounded for evidence, and the southbound traffic started flowing again. 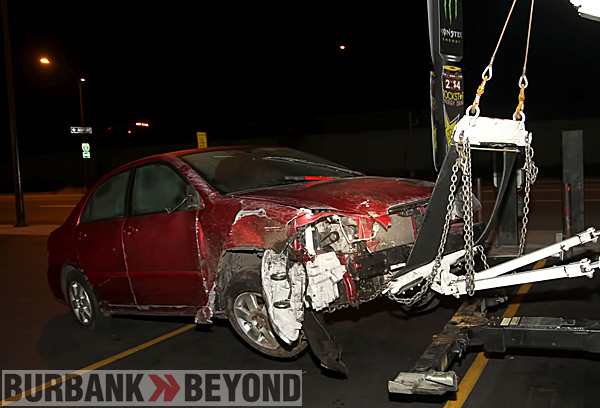 Burbank Police impounded a car involved in a hit and run accident (Photo By Ross A. Benson)