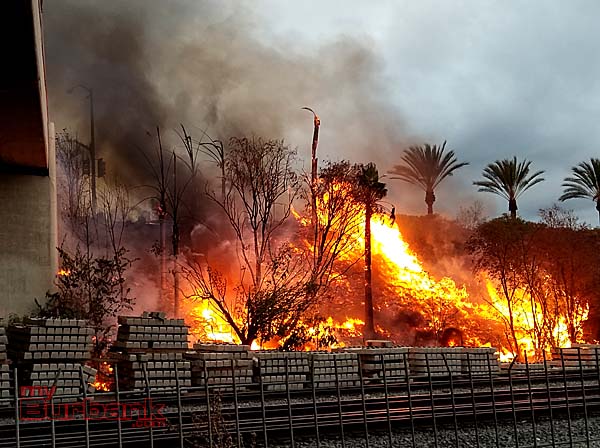 Not long after a brush fire spread along the embankment of the Burbank Boulevard Overpass yesterday evening, the Burbank Police Department arrested Edwin Matos, a 55-year-old homeless man, for allegedly starting the fire.

The fire prompted the closure of the Interstate 5 on-ramps and off-ramps, causing traffic backup which may foreshadow the gridlock in 2018 when the Burbank Blvd. bridge will be closed for construction.

During the fire, a traffic light was damaged and had to be repaired by the Public Works Department. Irrigation lines were also affected. Although the brush fire quickly spread from the south side where it originated to the north side, it was soon contained by the Burbank Fire Department. Since there are not any fire hydrants on the bridge, engines had to shuttle over 5,000 gallons of water.

The BPD was in search of a man fitting Matos’ description after receiving a report from a witness, saying the suspect ran northbound on the railroad tracks after causing the fire. When police spotted Matos and told him to stop, he ignored the officers’ orders and began to run. They eventually caught up with Matos who struggled with police, attempting to resist arrest.

While the arrest was taking place, the suspect’s dog, a Chihuahua mix named Rico, bit an officer on his arm and leg. However, the officer was not badly harmed. Matos’ dog is currently at the Burbank Animal Shelter in a 10-day quarantine for rabies monitoring, which might lead it to be euthanized.

Matos, who is said to be from Burbank, was found in possession of multiple lighters, matches, and a switchblade when he was taken into custody. It was also discovered that he had three outstanding arrest warrants for drug offenses and resisting arrest. Matos was booked into the Burbank City Jail for felony arson, resisting arrest, and possession of a knife.

Matos is currently being held at $141,000 bail and is due at the Burbank Court House on Friday.